The Education of Sebastian Review 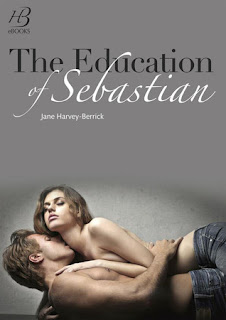 The Education of Sebastian by Jane Harvey-Berrick

A friendship between the lost and lonely Caroline, and the unhappy Sebastian, leads to an illicit love that threatens them both.
Caroline Wilson is trapped in a cold and loveless marriage with an older man. When her husband finally wins a long sought-after promotion, Caroline feels she has little choice but to follow him to a new home in San Diego. There she meets Sebastian, a young man of 17.
For an all too brief summer, their happiness blooms.
But external pressures begin to bear down, not least from the overbearing David, and Sebastian’s parents begin to suspect that their son has a secret. Even Caroline’s new friend, Donna, realises that dark passions exist below the serene surface.

First of all I have to warn y’all that while I really enjoyed this book some of you may not enjoy it because the hero is only 17 and the heroine is 30… I do NOT condone a relationship with a minor.  However, it was extremely hard to read this book and see the hero as a 17 year old… in fact there were many times where I had to remind myself that he was only 17.

Caroline may not have exactly been my favorite heroine but I really did like her and I understood her decisions… maybe not all of them but for the most part I felt for her.  She was in a loveless and actually a verbally abusive marriage to man that was older than her.  Not only was he verbally abusive but my goodness the one and only time they have sex in the book I seriously had to laugh because… Jeez, what a selfish prick!

She had been unhappy for some time and unfortunately she figured it was easier to just do what her husband David wanted her to do, rather than fight it.  He pretty much kept her under his thumb so that she would have to depend on him.  So when they move back to San Diego and she runs into Sebastian, a boy she had a sweet and very innocent friendship with years ago, it was hard not to see how easy it would be for her to fall in love with him.

Sebastian was something else.  I never would have put him at 17 years old, he had the looks of a god and the maturity level of an adult.  But, the poor kid had a horrible life and Caroline was one of the only people who had ever brought some light into it.  He cherished the friendship he had with her when he was just a boy but even at a young age knew that it was meant to be more...one day.  Personally, I think a lot of his feelings for her (at first) had to do with the fact that she showed him unconditional love and gave him the attention he needed and craved as a child.  But then when she came back and he spent some time with her those feelings grew to genuine love.  He knew exactly what he wanted with Caroline.. which was forever.

Plus he was a total sweetheart, he encouraged her to be herself, to fulfill her dreams, and to be happy.... he also made her feel loved and cherished... something only her father had ever shown her.

Caroline thought that Seb was 18 so even though she knew she was still doing something “wrong” she thought it was at least legal… well at least until after their first time together when she found out he was only 17.  Boy did she freak out!  I have to say I really didn't get her reaction, I mean I did because he's so young, but I didn't because the age of consent in the state of Missouri is 17.  But she told him they  couldn't get intimate again... she tried to put up the boundaries for many different reasons.

BUT... There was something special about him and she knew she wouldn’t be able to stay away, even though she desperately tried.  Their relationship was sweet and full of passion.  In all reality these two really did need each other.  Sure they probably should have been with people their own ages but they provided a love and companionship to each other that they were unable to get elsewhere.  Not to mention maturity wise there really wasn’t much of a difference.

I will warn you this book will end with some heartbreak but at this exact moment in their lives, it’s probably best that’s how it ended… at least for now!  I’m pretty excited to read the next book in this series because an adult Sebastian will probably be a dream come true!