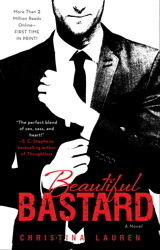 Book description…
An ambitious intern. A perfectionist executive. And a whole lot of name calling. Discover the story that garnered more than two million reads online.
Whip-smart, hardworking, and on her way to an MBA, Chloe Mills has only one problem: her boss, Bennett Ryan. He’s exacting, blunt, inconsiderate—and completely irresistible. A Beautiful Bastard.
Bennett has returned to Chicago from France to take a vital role in his family’s massive media business. He never expected that the assistant who’d been helping him from abroad was the gorgeous, innocently provocative—completely infuriating—creature he now has to see every day. Despite the rumors, he’s never been one for a workplace hookup. But Chloe’s so tempting he’s willing to bend the rules—or outright smash them—if it means he can have her. All over the office.
As their appetites for one another increase to a breaking point, Bennett and Chloe must decide exactly what they’re willing to lose in order to win each other. Originally only available online as The Office by tby789—and garnering over two million reads on fan fiction sites—Beautiful Bastard has been extensively updated for re-release.

So this one is a bit different… I will admit that it is good, really good… but I will also admit that I absolutely did NOT like Bennett until I got inside his head and even then I wasn’t a huge fan – at first!  I really did kind of struggle with this one but at the same time… for the life of me I just could NOT put it down.  I had to know what was going to happen next and in all reality I really did like Chloe.

Chloe is one heck of a determined woman.  While I really liked her passion and her drive as well as her love for her friends… I really admired how she handled her boss.  I mean the dude was a prick.  But she felt a pull to him and I’ll admit when these two finally went at it, and it did not take long before they were unable to help themselves, they had explosive amounts of chemistry.  But otherwise all they did was fight.

Bennett was gorgeous… in looks.  Otherwise the dude was an ass, seriously!  I have to say had there not have been as many chapters as there were in his POV I really do NOT think this book would have worked… at least for me.  Had I not have know exactly what he was thinking and boy did I LOVE to see what he was thinking, I would have thought he was just some arrogant prick that thought he could have his cake and eat it too.  But I have to say that it was getting inside this Beautiful Bastards head that kept me engrossed in the book.

I loved it every time Chloe shocked him with what she said or did and I loved when he would find himself thinking about her.  His POV is what made this book!

I do recommend this one but be prepared to hate our hero for a while… but don’t give up on him because once the ice finally does crack the guy is a dream!