Someone to Love Review 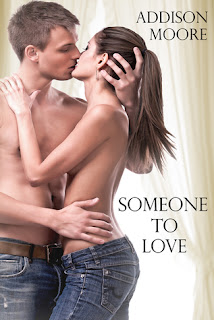 Someone to Love by Addison Moore

Book description…
What happens when two people who don’t believe in love, happen to fall madly into the most beautiful relationship they could ever imagine? A train wreck.
When twenty-year-old Kendall Jordan transfers clear across country to Garrison University, the last thing she’s looking for is a one-night stand. Unfortunately, that’s exactly what, gorgeous, Cruise Elton offers.
Kendall has long since come to realize that love is an illusion that never lasts, and Cruise couldn’t agree more—but something deep inside her wants him all for herself. So, Kendall devises a seat of the pants plan to “play the player” and proposes that Cruise tutor her in becoming a female version of himself, Garrison University’s own playboy.
Real feelings begin to emerge, and neither Kendall nor Cruise know how to classify them. Everything they once thought they knew is redefined as they discover, in one another, Someone to Love.

Well big huge congrats to Addison Moore… she has officially set my brain and extremely over active imagination on fire!  It’s been a while but I read her Celestra series and fell in love with her writing style.  She has this way of making her characters have so much chemistry that you can almost see the steam coming from your ereader!  Anyway, when I saw that Addison wrote a New Adult novel I hit that one-click button on Amazon so fast that I barely even read the title because in my eyes if Addison can create THAT much chemistry between Skyla and Gage and Skyla and Logan to the point where I can’t decide which one I want Skyla to have then I KNOW she’s going to give me some massive amounts of Chemistry on a NA novel… and she did!

Someone to love started off a little slow for me but in a way that’s kind of hard to explain… I almost felt like I missed something because there’s this hot as can be prologue and then Kendall having this conversation with the Adonis himself, Cruise, and the conversation didn’t make a whole lot of sense… but I kept going and I’m so glad I did because once I got past the first chapter and the getting to know each other and all the dirty flirting, “innocent” touches, and kissing practice started I was constantly having to cool myself down.

She takes these two young adults who think they are emotionally damaged together… they do have some issues the biggest one being actual communication with real words that actually make sense, but in all reality they’ve got pretty good heads on their shoulders and they’re absolutely perfect for each other.  The one thing they really seem to have in common is the one thing that they can’t seem to avoid once they’ve spent a small amount of time together.  And I have to say that I fell in love with Cruise right along with Kendall!

Now… Cruise is something else all together and I’m only going to talk about this because it seriously jacked his ratings in my book boyfriend collection – the entire scene with the appaloosa and the ride?  Yeah… that melted my heart and once you get there you’ll understand, but for me it went a little further because I had an appaloosa that looked exactly as Cruise describes in this scene which is in his POV… so yeah – Cruise Elton, you have totally won yourself a spot in my book boyfriend collection!!!