Up in Flames Review 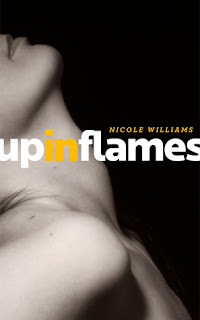 Up In Flames by Nicole Williams

Book description…
One small town girl with a bright future.
One smokejumper with a dark past.
One summer that will forever change them both.
They’re going . . .
Up In Flames.

Elle’s life couldn’t possibly get any more small town than it already is. She was raised in the same home as the two generations before her were, her family owns the iconic downtown cafe, and she’s been dating the pastor’s son since she was allowed to go on her first date at sixteen.
Cole’s life couldn’t possibly get any larger. He’s tried. Roaming from town to town for the past three summers as a smokejumper, Cole dreads the thought of putting down roots. The only thing he avoids more than that is settling down with one woman, especially when there are as many willing women as there are trees in the forest he jumps out of planes to save.
Elle Montgomery’s life is going one way. And Cole Carson’s is going the opposite. There’s no reason their paths should ever intersect, even in a small town in central Washington.
But summer in the Methow Valley has other plans for Elle and Cole. After an awkward run-in at the local swimming hole, Elle tries to keep away from the guy who looks at her like she’s already lying beneath him in bed. She fails. Cole is about as successful at staying away from the girl who seems immune to his charms.
As the summer heats up, and tensions between Elle and Cole run high, he begins to realize there’s more he’s attracted to than Elle’s body, and she discovers there’s a lot more to the man that jumps out of planes into raging forest fires than meets the eye.

How many Nicole Williams books have you read?  Personally, I’ve read six of her books and seriously I’ve loved them all!  But I have to say that Nicole has definitely found her genre and it is New Adult or maybe it would be Mature YA?  Whatever, the woman knows how to write some amazing scenes with some hot as can be men and explosive amounts of chemistry between her characters!

Elle was one of those heroines that I typically get really annoyed with and I did but I also didn’t.  She is living the life that she thinks every one else wants her to live instead of being who she wants to be and doing what she wants to do.  She plays the perfect daughter, perfect girlfriend, and all around perfect American sweetheart but in all reality she craves a little wild.  She doesn’t let anyone see the wild she craves it’s something she only satisfies when she feels as if she’s suffocating and she only lets it out when she’s alone.  Well at least when she thinks she’s alone instead of some smokin’ hot smoke jumper who is ready to show her the wild she craves.

Cole is… well he’s something else.  He’s not really a “bad boy” but he is enough of one to be exactly what Elle craves as well as what Elle wants, even if she’s not ready to face that fact just yet.  Cole has been hurt in the past so the way he treats Elle runs pretty hot and cold and even though there were times when I was mad at Elle for not telling Cole about something I was madder at Cole and his reaction to what he heard about or what he thought happened.  BUT…. He certainly knew how to make it up to her or I should say he certainly knew how to make my heart melt!

The relationship between Cole and Elle was scorching and entirely consuming - and that was BEFORE she was finally Cole’s.  It was his words to her that engrossed my attention and left me craving even more of him, so the fact that Elle was able to push away her feelings for him as often and for as long as she did is actually quite remarkable.  But it was when everything fell into place and decisions were finally made that the flames between these two went sky high.  If there is one thing I can say that made Up in Flames a must read this year – it’s the colossal amounts of chemistry between Cole and Elle!

Congratulations to Nicole for another amazing hit!