Fight With Me Blog Tour & Giveaway 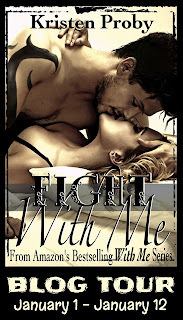 So I recently got the opportunity to sit down with Nate and Jules from Kristen Proby's second book in the With Me in Seattle Series - Fight With Me!  I have to say I LOVE these two... Nate is just so intense and Jules is so the kind of girl I would be friends with.  I had two private conversations with each of them prior to our interview... Jules and I thought it would be funny to make Nate squirm and Nate wanted a specific question answered and the sad thing is Jules' answer was still vague... so I kind of owe it to the guy to give him some ideas!  In the rafflecopter one of the entries is to leave a blog comment so what I want is for y'all to tell me what you think would make a PERFECT vacation spot for Nate and Jules!


Thank you both so much for joining me today.  I’ve had an absolute blast getting everything situated with Jules… looks like today should be quite interesting for you Nate.
Nate clears his throat and shifts in his seat, sending Jules a heated glance.
Nate: Thanks for having us, and thanks for being so accommodating, meeting with us in downtown. It’s been a busy few weeks.
Lori:  Aww Nate, I’d do just about anything for you *Shares a knowing smile with Jules before winking at Nate*

Lori:  How have both of you been?
Jules: We’re doing great, thank you.

Lori:  So I was talking to mutual friend of mine and Kristen’s and was telling her I was going to be interviewing y’all and asked her what I should ask.  Her immediate response was “Ask Nate about the apa!”  So Nate… you’re being put on the spot right away *Winks at Nate*.
Jules snickers and Nate scowls.
Nate:  What, exactly would you like to know?
Jules: *rolls her eyes* Oh, come on. You know what they want to know. *shakes her head and winks at Lori* Yes, it’s fantastic, and yes, every man should get one.
Nate:  *Muttering under his breath*  Luke warned me you were going to be trouble.
Lori:  Trouble?  Who Me?  I’m just asking what every woman wants to know. *Bats her eyelashes at Nate*  But… does it feel different for you?  Clearly Jules likes it *Winks at Jules* but what about you?
Nate: *Shifting in his seat* Anything that heightens sensation for her, and her body’s natural response to it, is going to make my experience more pleasurable too. But being with Julianne is always wonderful.
Lori:  *Smiles at Nate’s squirming*

Obviously the two of you have some massive chemistry which made it difficult to work together knowing there was a no frat policy at work.  When you finally realized that you had to have each other how hard was it to keep your relationship from your co-workers?
Jules: I hated it. I think it was harder for me than for Nate.
Nate: That’s not necessarily true. I hated it too, and wanted to shout it from the rooftops, but I had to protect you.
Jules: I can take care of myself.
Nate: Yes, but you don’t need to anymore, baby. *Kisses her hand and gazes lovingly at her. Jules grins and kisses his cheek.*
Lori: *Sighs dreamily*  Y’all are just too cute!

I loved watching the two of you work out together; Jules can kick some major ass.  Is going to the gym together something you do often?
Jules: We do enjoy going to the gym and getting all sweaty, but Nate doesn’t get much done. He’s usually too busy watching my ass.
Nate: And you don’t watch my ass?
Jules: *Purses her lips, giving it thought* Actually, it’s your arms. Most specifically, the arm with the tattoo… watching them flex and get all sweaty when you’re doing pull-ups, dear Jesus…
Nate: I guess I should do pull-ups more often. *Smiles widely*
Lori: So I have to ask Nate… would you be willing to teach me some self defense moves?  Jules and I talked about this and she said you’d be the perfect teacher!
Nate: I’m no teacher! *He laughs and shakes his head.* But I’d be happy to recommend a few to you.
Lori:  Pfft Recommend… I was hoping you’d teach me.  You know clothing optional.  Jules and I have the perfect payment plan all worked out *Looks over at Jules and winks*
Jules: *Laughing*  Come on ace, I need a new handbag.
Nate: *Glares between Lori and Jules* You sold me to Lori for a new handbag?
Jules:  *Shrugs innocently*  Maybe.
Nate:  You are so getting spanked when we get home.
Lori:  *Looks over at Jules and smiles big.*  Nice sister.

Nate what was your first impression of the lovable Montgomery family?  In particular, her brothers?
Nate: *Chuckles* Jules’ family is fantastic. They can be a little overwhelming at first, but they’re really welcoming.
Jules: Even Caleb?
Nate: Caleb and I are cool now. I wasn’t so sure at first, but we’re good. Let’s just say he’s a guy I don’t ever plan on pissing off.
Lori:  Speaking of that hot SEAL… how is he?
Jules: He’s doing well, as far as I know. He’s gone most of the time for work, but we just saw him at a family dinner this past weekend, and he was healthy and grumpy and ate everything in sight, so he was his normal self. *Smiles widely.*
Lori: When can I expect to get my hands… I mean my eyes.. I mean hear his story?
Jules:  Well, Kristen has told me that Will is next, then Samantha, and then Caleb after that. So, probably later this year. That girl works too hard. Turns to Nate We should send her to the beach house for a week.
Nate: Sure, I’ll call her.

I’m not the type of girl who is into chicks but I’d totally make an exception after seeing Jules Playboy spreads.  Have you seen them, Nate?
Nate: *Frowns and glances at Jules.*  No. I get to see her every day. I’m a lucky man. That part of her life is in the past, and we’re leaving it there.
*Jules links her fingers through Nate’s and smiles at him reassuringly.*
Lori:  *Smiles sweetly at Nate before turning to Jules.*  Maybe I’ve given him a hard enough time.  I don’t want to push him too far.
Jules: He’s just a little possessive when it comes to me.

Jules where would your fantasy vacation spot be?  *Winks over at Nate*
Jules: What was that look all about?
Lori: Nothing at all Sugar. *Smiles at Jules*
Jules:  *Eyeing both Nate and Lori suspiciously.*  Uh huh. Well… there are plenty of fun places I’d love to go. I think I’d enjoy spending a good month exploring Europe.
Nate: Surprised Really?
Jules: Yeah, why does that surprise you?
Nate: I just figured you’d like to go somewhere tropical.
Jules: See? Still learning stuff about me, ace.