Turn to Me (Kathleen Turner #2) Review 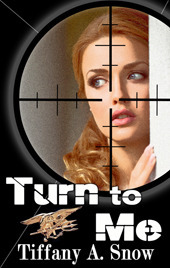 Turn to Me by Tiffany Snow

Book description…
When Kathleen Turner, office runner for the prestigious Indianapolis law firm of Kirk & Trent, started dating the boss she knew the risks. Senior Partner Blane Kirk is known for being a notorious player - the Baskin Robbins of dating with a different flavor every month. Kathleen is the happiest she’s been in a long time, especially as Christmas approaches, but she’s always known there was a termination date on her relationship with Blane.
She just didn’t expect that termination to be her funeral.
A festive afternoon of Christmas tree shopping turns life-threatening when Kathleen and Blane become targets for an unknown gunman. They make it home alive, but Kathleen realizes her boyfriend has been keeping secrets. The deadly kind.
Blane’s current case is drawing heated debate and stirring the pot of public fury. Kathleen is horrified by the threats – and worse – being directed at him. A former Navy SEAL stands accused of the wrongful death of an American citizen during a military operation overseas. The case has far-reaching political and military implications. Someone with a lot of money, and even more clout, wants Blane to lose.
As dead bodies of people connected to the defense start piling up, it becomes painfully obvious that disappearing witnesses and altered testimony are no longer enough for whoever is intent on guaranteeing the SEAL gets convicted. Kathleen and Kade, Blane’s brother and ex-FBI-agent-turned-assassin-for-hire, are on the trail of the killer.
Unfortunately for Kathleen, he’s already moved for the end-game – by painting a target on her...and pulling the trigger.

So I am in some serious love here… with this series!  Kathleen is awesome!  Seriously!  She is one determined woman who doesn’t let anything stop her from accomplishing, or helping someone, once she’s set her mind to it.  She reminds me so much of Stephanie Plum but I have to admit that I actually like Kathleen better than Stephanie (and I didn’t think that was possible.).  She’s got a backbone with some massive amounts of compassion that you just can’t look away from.  Her heart is in the right place, but unfortunately for her she keeps finding herself in the wrong place at the wrong time… over and over again!

I have to say that Turn to Me was even better than No Turning Back.  It really kind of put some things in to perspective for me and even thought I was pretty disappointed with a certain situation, I have to admit I am SO happy that Kathleen handled herself the way she did… instead of being a typical heroine and basically have the whole forgive and forget attitude.  There was also something else I was a little disappointed in as well… but I think that may get touched on in Book 3 – Turning Point… or at least I hope so because I have to say that if I had to pick it would be….umm…. a certain man all the way!

Blane – Kade – Blane – Kade… which one would you want?  That was a tough one and who knows, my mind will probably change over and over again throughout the series… quite frankly, it changed about five different times throughout the book!  Both are so deliciously perfect, okay not really but whatever, that it’s almost like you get the best of both worlds when they’re around.  They’ll both do just about anything to keep Kathleen safe… and they both feel something for her.  One probably more so than the other but I’m not even entirely convinced of that… I’m questioning if they don’t feel the exact same way about her.  Which makes it tricky since they’re brothers!

There is no doubt in my mind that Tiffany Snow is an amazing writer!  It’s been a while since I was so entirely engrossed in a book that it felt like only a few minutes had passed since I picked it up and I glance at the clock only to see that it’s going on 3am.  BOTH No Turning Back and Turn To Me did that… There is so much going on without it being overwhelming and if feels as if you’re on the edge of your seat from page one… okay so I really was on the edge of my seat from the first sentence and was still on the edge of my seat with the last word… if I’m not mistaken my exact reaction when finishing Turn to Me was “NOOOO! I want more!!!”  And now I have to wait until Feb 19 before I find out what will happen next!

This series is DEFINITELY one to check out!!!!