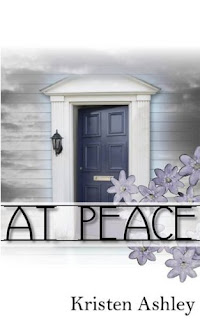 At Peace by Kristen Ashley was another wonderful hit that made it's way into my heart (pretty much like the rest of Ms. Ashley's work)!

Violet Winters moved out of Chicago to escape the criminal madman that is stalking her after he murdered her husband.  She moved next to security specialist Joe "Cal" Callahan.  Joe can't get enough of Violet even knowing he should have never started it.  He betrays her then realizes his mistake when tragedy hits the Winters household yet again and he must find away to win Violet back in order to keep that "full" feeling.

Violet was in my eyes the definition of one great woman!  She was sweet, loving, and one great Mom to her two teenage daughters (Kate, 17 and Keira, 14).  She had a great life with her husband, Tim, before he was murdered and felt that loss in her bones when she had to face the world as a single Mom.  But as a Mom she knew her priority was her girls.


"I was thinking that I spend an awful lot of time while Kate and Keira were growing up wishing I could do things.  Things like go to a movie whenever I waned.  Things like take a long, hot bubble bath when the spirit moved me.  Things like reading a book without the word "Mom" shouted over and over again"

As a Mom to two young kids I totally hear what she is saying ;)

I absolutely LOVED Vi's brother, Sam, they had such a loving bond.  A love that Sam wanted the world to know


"Most beautiful girls in the world!"  Sam kept shouting.  "That's right!  Drink it in!  Sheer gorgeousness!"

She felt deep for Joe pretty quickly into their meeting but also felt burned by him twice before he finally realized exactly what he had when it came to the Winters girls.  While Joe was trying to "sort his head" about what they were, Violet met another man, Mike Haines (YUM), and had a few dates.  He knew what kind of woman Violet was and just how special she was


"You don't get this, Vi, so I'll tell you.  I'm fallin' for you." I closed my eyes and Mike kissed them in turn and I opened them again.  "I know you don't need that, sweetheart, but then again, you need it all the same"


....sigh.... I will be the first to admit I am anxiously awaiting Mike's story mostly because he made me feel a squishy inside ;)

But Violet knew from the beginning that her and Joe had something special and knew that she meant something to him and that something was special because big badass alpha male Joe Callahan didn't do special for anyone!


"You're mine, Vi." he said and the way he said it, I focused on his face.  "I'm yours." That socked me in the gut too, so hard it winded me and all I could do was stare up at him.  "First fuckin' time you smiled at me in my bed, that's when it happened," he murmured.  "You're under my skin.  I like you there, buddy"

O.M.G. Even though he played with her heart and wasn't exactly Mr. Nice once he came around Joe Callahan became like "The Perfect Man"

It was part fascinating, part train wreck, and part awesome to watch Joe 'Cal' get over himself and the horrible grief he endured for the past 17 years once Violet walked into his front door in the middle of the night to confront her neighbor about the loud music.   He knew he had something special with Vi from the beginning as well and because of his past and the grief he still had he really struggled with coming to terms with it.


"She was working her way under his skin.  Every day, she got in deeper, even when she wasn't with him.  He'd be working a job, sitting in a meeting and he'd wonder what she was doing, if she was working, what she was wearing, where her kids were, if they were safe."

Joe not only fell for Vi but he fell for her girls too.  He didn't let anyone call him Joe, but he didn't mind (even loved it) when Vi or her girls called him Joe...everyone else...well...they knew not to call him Joe but call him Cal!  He bonded with Kate and Keira in a way that any single mother would hope her boyfriend would bond with her kids.  It was special, he loved those girls and was quick to jump in and help them with anything as if they were his own children!

Joe knew grief and he knew it passionately for a long time.  He finally got his head sorted (because of the Winters girls) and knew they were it for him


I could probably go on for ever about this book, it was great..no, amazing...no, one of my favorites, but I've probably given too much up about the book as it is so I'll just leave you with one more quote


At Peace by Kristen Ashley is by far a definite read for any Romance/Suspense/Drama lover!  It was a great book and is another of Ms. Ashley's that will stay in my re-read list!  I'm anxiously awaiting Make Haine's story but until then... Golden Trail is the next book in the series and I have to say if Tanner Layne is anything like Joe Callahan I guess I'll be falling in love with yet another fictional Character ;)