Talk Me Down (Tumble Creek #1) Review 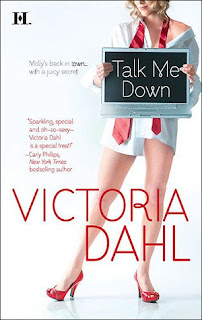 Talk Me Down by Victoria Dahl is a great light, humorous read with a super hot, some what shy Chief of Police.

Molly Jennings was a great character!  When she got together with her best friend Lori (he he he) they reminded me so much of how my friends and I are....total smart asses, quick wit, and A LOT of sarcasm!


"Thanks. You're like a little angel baby sent from Heaven to cheer me up."

The cherry she'd popped into her mouth got lodged somewhere too far back, so Ben leaned over and slapped her a few times until she coughed and swallowed.  Molly snorted.  "I feel like I should make a joke about you choking on your cherry, but I can't seem to put it together."

She keeps her career a secret, why I don't completely get, but she has her reasons.  After living in Denver for years and being pretty much chased off by her ex-boyfriend, Cameron, because he made every man she dated "fall for him" by talking about Molly's issues and convincing them she couldn't start a new relationship until she was over Cameron which he seemed to think she wasn't....major creepy guy alert!!!  So she moves back to her hometown of Tumble creek where she inherited her Aunt's house who passed away.  After a few days in town she runs in to Chief of Police, Ben Lawson, who she has had a little...ok big...crush on for a long time


She hadn't seen him in ten years, but Ben Lawson had been kind enough to make an appearance in her imagination almost every day, usually buck naked and looking for a good time, bless his heart.

Ben is like a dream...he's absolutely adorable with all his blushing at Molly...OH and the man has a love of reading!  Unfortunately, because of a sex scandal involving his father and a high school student, Ben is a little stand offish.  He doesn't date any women in town in an attempt to avoid his name involved in a scandal but yet when he sees Molly he can't seem to chase away the thoughts that she should be off limits....especially after he sees her laughing with out regard and having a good time at The Bar with her friend


She laughed.  A lot.  Ben didn't laugh much, and he thought it would be a grace in his life, a blessing, to hear a woman laugh every day, every hour.  To hear her laugh in his bed.

He tries real hard to convince her to tell him what she does for a living because even though he knows she's going to cause some trouble and he shouldn't go there with her...he just can't help himself and the attraction he has for her.  So he finally decides because he wants a real relationship with her that he'll give her a little time.

So Ben comes out of his shell a little one night at The Bar with Molly, Lori, and Helen.  He cracks a few jokes especially about Lori and everyone thinking she isn't into men.  It was actually so funny, even though I don't plan on sharing it I had to highlight it just so I could go back and read it....I think that may have been one of my many late night giggle fits where my husband just glared at me like I'd lost my mind...LOL.  Anyway, all 3 women seemed shocked by this


"What in the world's gotten into Ben Lawson?  Jokes?  Flirting?  Maybe I should sleep with Molly.  I think she's got a magic hooha."

Swear I had tears from laughing so hard when I read that chapter!

Okay, so Molly ends up with a stalker.  Someone is breaking into her house but making it look like she is just being careless or paranoid by leaving doors unlocked or open, leaving her work files exposed, letting her see them outside her house watching her.  Until...she gets a threatening note on her door to "Leave Tumble Creek or Die".  So of course Ben's worried and scared so he sets out to make sure she's safe.

Molly and Ben continue their "not dating" relationship and start to realize their feelings for one another.  Feelings that it seems have been there for a long time


God, he was beginning to love her.  "I don't want anyone but you here, Molly"  "You sure about that?"  "I wanted you even when I shouldn't have"

After Ben gets the pleasure of meeting Cameron because the lunatic traveled the four hours to pick Molly up for a date she had canceled six months prior, he finally gets her to talk....a little.  She tells him about how he stole the men she'd dated from her and how he was only there to ruin her life.  But being Molly there was no shortage of humorous sarcasm


"Little Blue was my last friend, and frankly the last time his batteries ran out I had a fleeting moment of panic that he'd been compromised!"

So after dealing with the blowup of Cameron they come home to find her stalker in her kitchen.  Stalker is arrested but Ben finds out about her secret and is none too happy with her about it...not because of what it is but because it involves him in a scandal and he's pretty gun shy about those.  Unfortunately for Ben he'd just confessed his love for her in between the drama of Cameron and the stalker.

So, things end for Molly and Ben but no worries because even though they thought the stalker was caught they were wrong and the actual stalker had just gotten lucky there was another crazed lunatic out to drive Molly out of Tumble Creek.  Fortunately for Molly, Ben decides to check things out.  He arrests the stalker at the doorstep and runs in to find Molly tied and gagged to the chair in her room.  He feels tremendous guilt for avoiding her and not getting over himself sooner so they could restart their relationship


"But please say you can't live without me, because...because I'm miserable and I need you."

So sweet!  So there you go a happily ever after.  Oh and the epilogue.... totally worth reading the whole book...all I'm gonna say is....sexy cop and a black stetson ;)

Talk Me Down by Victoria Dahl was a very nice light read.  I'll keep it on my reread list because it really was a great little story but the humor and sarcasm is what will have me reading more of Ms. Dahl's work!  If you pick it up, I hope you laugh as much as I did!