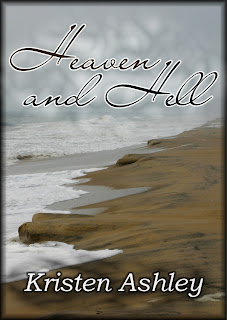 Heaven and Hell by Kristen Ashley

Book description.....
After making a bad decision when she was very young, Kia Clementine finds herself in hell. Then, suddenly, within the time it takes for a shotgun to blast, her hell changes. Completely. Then out-of-the-blue she sees Sampson Cooper, her celebrity crush. A man the whole world knows is decent. A man the world knows is loyal. A man the world knows is good. All of these very unlike her now dead husband.  He’s sitting at a table right next to hers. And she catches his eye.  Terrified of the interest Sam shows in her, Kia finds the courage to go out with him. Not long after, she shares her dark secrets and Sam shares that he’ll stop at nothing to gain her trust.  As Sam leads Kia to heaven, Kia realizes that Sam is living his own hell. But although he gives her beauty and she gives him everything, he withholds his trust.  Even with all the beauty Sam shows her, Kia wants it all. But Sam forces Kia to make a heartbreaking decision and only she can decide. It’s all or nothing.

Kia oh sweet Kia!  I adored Kia, I connected with her, I could relate to her, and I just simply felt for her throughout the entire story.   Kia lived in hell for seven years, she lived in hell with her husband Cooter Clementine.....LOL...yep that's his name - cracked me up so much I had to call some friends to tell them about it....wait, now that I'm thinking about it after a awesome cup of coffee, no wonder he was such a jerk...his masculinity was probably questioned daily because his name is sometimes used to refer to a .....well you know lol.  By all means I am NOT excusing what he did, there is never an excuse for that believe me I know I've been in Kia's shoes before...  Anyway, so Kia is in hell and let me tell you I feel for her, I feel for any abused woman so reading this was a bit difficult for me but at the same time Kia meeting Sam and then having what she did made reading it worth while to me! 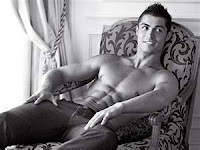 Sam.....sweet Jesus that man got my skin tingling he was so hot (I picture Cristiano Ronaldo....mmmmm) ...He was an ex-NFL star who enlisted in the Army after his brother was killed in the line of duty... I kind of have a soft spot for anyone involved in the Army because my nephew just left for basic training last week...(So proud of you and love you Steven!!!!)  Loved this quote and because I'm big into supporting our Troops...... "One thing to play at warrior wearin' pads on a field.  Another thing all together to be one."  Anyway, Sam..... he happened to be sitting at the table next to the table Kia was seated at.  She is desperately trying to ignore him and let's just say Sam found that appealing along with finding Kia quite appealing ;)


"Baby for ten minutes you made me invisible."

I seriously have to sit back and wonder.....how often do celebrities get to go out to dinner or out at all without being hounded by other people?  It's a shame that celebrities don't get a day off to do whatever they want without criticism!  It really is sad that society can't look at them as the everyday people they really are.

Needless to say Kia caught Sam's eye so when she went to dinner a few days later and sees Sam with a beautiful woman she's kind of crushed.  She doesn't say hi to him she just completely ignores him and apparently that did not make him happy.  So he approaches Kia while she's thinking about her past and has tears in her eyes...upon seeing them Sam's anger slips away and he tries talking to Kia about why she's upset....  Once Sam sees that Kia really is who she is and is not playing a game he asks her out.....on a date..... and Kia ends up getting quite a little parting gift from Sam Cooper

Sam and Kia start seeing each other and let me tell you it's beautiful and I say beautiful because Sam knew if he helped Kia work through her hell that heaven would be waiting on the other side for them.  So he did, he helped her see that there are good men out there, men who will treat you right, men who will show you that not only are you beautiful but that you deserve to feel that beauty.  BUT Kia is still afraid that Sam will get bored, that he'll get sick of dealing with her because she has A LOT to work through

Love Sam....seriously I love him....he knows what to say, he knows how to handle Kia and let me tell you handling a woman who has had to face abuse the way Kia did is hard....having to handle a woman who faced it to that extreme for as long as Kia did is almost impossible and takes the patience of a saint....but Sam did it and he did a beautiful job of it and Kia sees it too....She's falling in love with him as she's finding out who she is.... She's also finding her way with Sam...her way in a 'healthy' relationship...


"Anywhere is heaven as long as it's an anywhere with you."

Here is where it got emotional for me because I knew what Sam gave Kia was beautiful and it upset me to no end to watch her struggle with her decision especially because of what she found in Sam, how he takes care of her, how he handles her....so here is where the tears really began for me


I felt the tears pool in my eyes, one slid over and trailed down my cheek.  Sam turned into me and with a hand at my jaw he tipped my head back so he could look at me.  His eyes moved down my cheek.  Then he whispered, "Seein' that kills me."

Knowing how much I loved Sam and why I loved Sam....I have to admit that he also pissed me off....I mean pissed me off so bad that I was at the point of tears in my eyes pissed.  I know he saw what he had in Kia and he knew it was only a matter of time before she'd give up...that was quite clear by the desperation in the things he would do or even the things he would say but yet he couldn't let go and give it to her....he couldn't let go until he realized he'd lost her and that....that's what pissed me off.  Kia waited for it, she fought for it, she begged him to give it to her and even told him why but he wouldn't give it to her, he wouldn't even tell her he couldn't give it to her...he just...closed off.  I get it, I really do but it can not be said that not once did I get upset with Kia for her decision....not once did I blame her and quite frankly she deserves a pat on the back for having the patience she did until she'd finally given up.  After what she went through she deserved it all and knowing what Sam knew he should have realized that too.  THANK GOD.....Sam got his head outta his ass and gave Kia what she wanted...he gave it all to her and it was heavy stuff....but giving that to her meant they could walk into Heaven together!

I have to admit I seriously struggled with this review.  With everything else my thoughts just come to me but with this one they didn't.  I don't know if it was the fact that I felt so connected to the characters or if it was the emotional struggle I faced while reading it because I could relate almost too well.  All I kept thinking was beautiful simply beautiful..... that Kia got that after living in hell for seven years....she deserves that beauty.  Abuse is such a tough subject.  You can't understand it unless you've lived it.  It's easy to cast judgment but until you've actually been in that situation...and I mean ACTUALLY lived it you'll never understand the decision someone has made.  This book actually gave a small glimpse of what it's like to be in an abusive relationship and it also gave a small glimpse of why it's so hard to reach out and ask for the help you need or even accept the help that is offered.  Because of everything Sam and Kia faced, how they faced it, and how they ended up this book will always have a special place for me, it will always be something special to me.

I don't think it's hard to figure out that I definitely recommend Heaven and Hell by Kristen Ashley....My review isn't all peaches and cream, my thoughts on this book are more emotional than anything, they come from something personal, and they were hard to think about but don't let that give you the wrong impression that Heaven and Hell is not a typical KA book....it is....it SO is ;)  You have your hot alpha male, adorable and sweet as pie heroine, AWESOME secondary characters, and a great story line with lots of drama, humor, and a little hot smut thrown in there.  So make sure you check it out and after you do....make sure to keep me up to date on how your love for Same Cooper continues to grow as he shows Kia what heaven is really like!