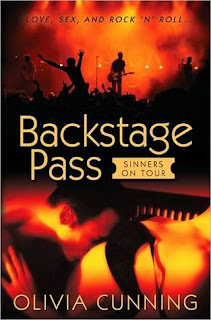 Backstage Pass by Olivia Cunning is a book that will satisfy your Rock Star cravings.  It's hot, sweet, hot, funny, oh did I mention hot?  Warning....this is an erotic/contemporary romance novel with explicit scenes.

It's been months since Brian Sinclair, lead guitarist for the famous rock band, Sinners, composed anything. Unable to write the music that once flowed so naturally, Brian is lost without his musical mojo. But when sexy psychology professor Myrna Evans comes on tour to study groupie mentality, Brian may have found the spark he needs to reignite his musical genius. When lust turns to love, will Brian be able to convince Myrna that what they have is more than just a fling, and that now that he's found his heart's muse, he doesn't want to live without her?

Brian 'Master' Sinclair is like the perfect bad boy!  He's a rock star, one you wouldn't want to take home to Mom and Dad at first because his looks scream bad news.  But once you get to know him you see he is a sweet hopeless romantic (that falls for a girl fast and hard) who may not necessarily care what people think but still gets bothered by being discriminated against because of his looks and career.  I swear he made me smile so much  I wanted to put him in my closet and keep him forever ;)


"They warned you that I was a romantic retard, didn't they?  She turned her head to glance up at him. "Huh?"  "Don't play dumb.  You don't have to walk on eggshells, Myr.  If I'm stupid enough to fall in love with you in twelve hours, I deserve to have my heart broken."

Yes...he admits the way he is....he even does it with in the first 60 pages of the book!  But as with most of our lead alpha males he knows what he wants and is NOT afraid to go for it and go for it fast


"Wanna go to Vegas and get married?"

Now I personally probably would have said yes because well even by page 67...yes 67! it's already painfully obvious that Brian is a sweet, hot, bad boy that would do anything for the love of his life and it's also painfully obvious that what they have, if not already there...crazy I know..., is headed for unconditional and eternal love. But Myrna turns him town 4 different times throughout the book...crazy I know but then again maybe she's one of those women who wants a big fancy day?....Pffft... if it were me I'd still say yes ;)


Myrna...terrible name but awesome character... is a human sexuality professor and after meeting Brian in the hotel lounge her conference was being held at and after couple of days with him heads back to Kansas City to get back to work.  A month goes by and both Brian and Myrna think about each other and after realizing that he doesn't even want any other women touching him and a little push from Trey, Brian decides to get in touch with her


"Now I just have to get up the nerve to have my heart shredded again."

But she says yes to flying out and meeting up with him for the weekend!

While with Brian the first time Myrna got extremely curious of the bands groupies...but seriously who isn't curious?  I don't get it...just cause they're famous and may be hot as all get out why in the world would you want to sleep with a complete stranger who probably won't even remember your name 5 minutes into the act much less ask for it?  And who knows where they've been or what they've touched (eww, where's my hand sanitizer) Oh well wouldn't be rock n roll without sex...right?  Anyway, so she's curious and gets an idea to research the groupies to find out what makes them that way and heads out on tour with the Sinners.  She's "having fun" with Brian because she's scared for it to be anything else because of her psychotic ex-husband but they're having so much fun together and she's finding herself getting jealous of what the groupies have to say about Brian...it's kind of funny especially because these women truly believe they are in love with these guys...I mean come on really?

So with out really realizing what's happening Brian starts to get under her skin (she's already embedded in his and not going anywhere).


He had everything he wanted.  He needed.  Right here.  This woman.  He knew she wouldn't appreciate his sentimental thoughts.  She didn't want to hear that he loved her, no matter how clearly he felt.

He knew exactly what she was to him but she continued to fight it saying it wasn't going anywhere and they were just having fun.  But...if that was the case then she wouldn't have taken care of not only Brian but the other Sinners and roadies as well?  She made them keep at least one bus clean, cooked for them (pretty much whatever they asked for), jokes around with them, and tried to be a friend (even admits she cares about them).  She also stood up to Brian's Dad because he made her so mad.  Now if that isn't really caring for someone, let along loving them, then I don't know what is.

The tour has a break and after spending a few days with Brian in L.A., Myrna heads home to Kansas City so she can get some of her research data completed and while at home she gets an unwelcome visit.  Brian swoops in to her rescue and BAM.....she realizes her actual feelings for him


Perfect.  The man was perfect.  Perfect for her.  And she loved him

About damn time Woman!  Jeez...finally I can say YIPPEE!!!!  After hearing Brian actually say the words he's wanted to say for so long she tells him she loves him and he goes for it again


"You know," he said, "we'll be in Nevada for a show next week.  Wanna go to Vegas and get married?"

Backstage Pass was a perfect addition to my rock star....smutty....hot collection.  It's on my re-read list for sure because...WOW that book was H.O.T....hot!  Check it out, you'll be glad you did....but make sure to have a cool shower or your significant other handy while reading it ;)