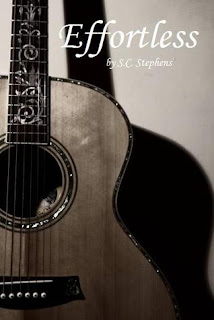 Effortless by S.C. Stephens is the second book in the Thoughtless series and is by far my favorite of the two because of the love Kellan and Kiera have for each other.  If you haven't read Thoughtless you really should read it first otherwise you may be a little lost at points in the book!


Book description.....
A lot can happen in a year. You grow, you change, you learn from your mistakes. And Kiera had made a lot of mistakes to learn from. But she had learned, and she was determined to never cause a man pain again, especially the amazing man who currently held her heart. But life offers new challenges for every relationship, and when Kiera’s love is put to the ultimate test, will it come out the other side unscathed? Love is easy…trust is hard.

Picking up where we left off in Thoughtless....Kellan and Kiera's relationship continues to grow and they continue to share this passionate love for one another.


His eyes rested on mine and my breath caught at the love I saw in that gaze.  I didn't think I'd ever get used to seeing how much he adored me.

These two had a rough start....first they fell in love while Kiera was still in a relationship with Denny, then they did the whole back and forth thing, and then finally after both had months of misery they reunited.....so it's not like their relationship actually started off on the right foot.  They knew they loved each other and that love ran bone deep but yet they both had some big insecurities in themselves and in each other.

Kellan wants Kiera to lose her insecurities about herself, most especially the ones where she feels like she isn't enough for Kellan


"Someday, I'll get you to feel like the confident woman who was prancing around in her underwear last night, all of the time."  Running his hand back through my hair, he added.  "You are a beautiful, intelligent woman with a boyfriend who adores you.  You have nothing to fear...ever."

She felt like she was constantly judged by people on whether or not she was worthy to belong to Kellan.  It especially didn't help that Kellans "past" continued to throw itself in Kiera's face.

With the upcoming tour Kellan and Kiera spend as much time as they can together.  He confronts one of his past...umm whatever they were LOL..., they get cell phones to keep in constant contact with each other, they have an interesting introduction to The Hulk....LOL...you'll understand after reading the book...Griffin is all I'm sayin'..., they share a moment during the D-Bags last show at Petes while Kellan sings Kiera her song, and have an....ummmm *cough cough* awesome?...lol yeah that works....time at Matt and Griffin's party on their last night home.

Saying goodbye is hard for both of them....but it must be said that Kellan has got a way with words and those sweet words make saying goodbye seem almost easier


"This tour is just me being gone for another show...a really long one.  But when it's over, I'm coming home to you, to slip into your warm, inviting be, like I always do..."

So the D-Bags take off to tour the country and Kiera, Anna, Jenny, and Rachel head to Pete's to load up the boys instruments and take them to Evan's loft.  It's at Evan's loft that Kiera gets her first and second taste of what Kellan has left behind for her and he has left hundreds and hundreds of letters for either someone to give her or for her to find.....again that boy has got a way with words....SIGH....

Life with Kellan on the road starts off okay for Kiera.  She keeps herself busy with finding Kellan's letters & even a picture...wish I could get a look at that..., work, school, friends, study groups, and her talks with Kellan every night.

Then there is one phone call in particular that....ummmm so can't give it away it's just too darn funny but I will say.....Denver Omelet.....O.M.G....seriously I read this part and thought somehow S.C. figured out something my wonderful husband would so freaking do to me....I LOL'd so hard I had tears.

Finally after two months of being apart Kellan and Kiera get to spend Christmas together at her Parents house back in Ohio.  They have a beautiful 5 days together before he has to head back out to the D-Bags and the tour.  BUT....because of a text that Kellan received from a "private" Kiera is now having a few doubts but tries to push them off because she wants to believe in Kellan instead of doubt him and is afraid to be "that" girl.

Unfortunately here is where the doubts seriously begin and to top it off Kiera is faced with the challenge of how to tell Kellan that Denny is back in Seattle.  First, Rachel gets the D-Bags site up....fans start posting pictures and videos of the guys and Kiera gets a small sight of something that could be taken many different ways and sees that familiar face three times.  Second, Kiera and Anna fly to Boise where the guys have a show and while on the bus with Kellan another band member makes a comment that makes Kiera question Kellan's faithfulness and honesty.  Third, Kellan says he has something he needs to tell her but again avoids it and even receives a few more texts before the girls head back home.  BUT....on a side note.....Our D-BAGS GET SIGNED!!!!!! Congrats boys!  Having to deal with Griffin....who I actually find extremely amusing - just sayin'....as long as you have you SOOOOO deserve it :)

Moving on......Kiera finds some more letters from Kellan, meets a new friend (Cheyanne), has some amazingly hot...ummm...*clears throat* phone conversations ;), and Anna finds out some HUGE news.  Unfortunately because he wasn't able to fly home to celebrate their anniversary Kellan surprises Kiera and he does it while Denny is there.  Things start off real bad....then they go good because he believes her....BUT then they go real bad because he finds something and thinks it's Kiera's and has a bad memory of what his Mother constantly informed him of....so he walks out on her.

Don't worry though...Kiera has had enough of Kellan hiding from her and decides to confront him about what he's hiding.  They end up working everything out after Kiera has to share Anna's secret and Kellan finally....finally....confesses to Kiera what he has been hiding and again K&K are back to complete bliss.

I am really hoping that S.C. Stephens will write the third book.  I'm deliriously anxious to find out what happens to our adorable K&K next as well as what happens with the rest of the D-Bags ;)

Effortless by S.C. Stephens is an emotional read.  It shows real struggles that couples face when dealing with the long distance thing and/or extreme trust issues.  I have to say I honestly, as much as I love the two of them together, did not see them where they ended up but have to admit I'm so happy they did.  They finally got their communications issues worked out and found their way back to happiness together.