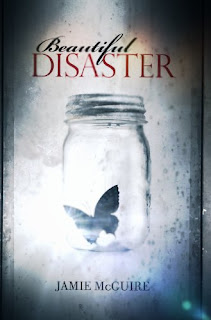 Beautiful Disaster by Jamie McGuire is a book that is sure to cure your bad boy cravings with so much college co-ed drama you'll feel like you're in the middle of an addictive soap opera.

The new Abby Abernathy is a good girl.  Abby believes she has enough distance between her and the darkness of her past, but when she arrives at college with her best friend America, her path to a new beginning is quickly challenged by Eastern University’s Walking One-Night Stand. Travis Maddox, lean, cut, and covered in tattoos, is exactly what Abby needs—and wants—to avoid. He spends his nights winning money in a floating fight ring, and his days as the charming college co-ed. Intrigued by Abby’s resistance to his charms, Travis tricks her into his daily life with a simple bet. If he loses, he must remain abstinent for a month. If Abby loses, she must live in Travis’ apartment for the same amount of time. Either way, Travis has no idea that he has met his match.

Abby is awesome!  She's had a rough life because of her parents but has decided to get a fresh start at college.  She's sweet, loyal, and doesn't fall for Travis' charms.


"I didn't say you're a bad person.  I just don't like being a forgone conclusion for the sole reason of having a vagina."

Love it....especially being said to a male who does NOT have female friends...it was just priceless.  So anyway, Travis and Abby start to become friends and learning about each other.  Travis gets called for a fight and makes a bet with Abby that he won't let his component get even one hit if she stays with him for a month and if he does get hit he will abstain from sex for that month.  Of course, being the perfect bad boy he is, Travis wins and Abby ends up moving in to his apartment for the month.  She's afraid it's all a ploy to get in her pants but Travis continues to tell her that he likes her too much and that she's important to him


"Why on earth would you want me to stay with you, anyway?" I asked.  Travis shrugged, shoving his hands in his pockets.  "I don't know.  Everything's better when you're around."

So sweet....sigh....  So they begin their month of living together.  Abby starts to date one of Travis' frat brothers, Parker, and he does not take it well but tries to act nonchalant because he doesn't want to lose Abby all together.  A few rumors start and things end between Parker and Abby at least until her month is up with Travis and she's back in her dorm, or at least he thinks that's what will happen.  But lines start to blur between Travis and Abby and her last night at his apartment the line is totally crossed.

She's so confused about what to do about Travis because she thinks he is exactly what she doesn't need so she moves back into her dorm and Travis freaks out.  He thought things had changed and that they were going to be together but even thought she's determined to act like nothing happened between them he is just as determined to prove her wrong.


"I know we're fucked up,, all right?  I'm impulsive, and hot-tempered, and you get under my skin like no one else.  You act like you hate me one minute, and then you need me the next.  I never get anything right, and I don't deserve you...but I fucking love you, Abby.  I love  you more than I've loved anyone or anything, ever.  When you're around, I don't need booze, or money, or the fighting, or the one-night stands...all I need is you.  You're all I think about.  You're all I dream about.  You're all I want."

Uh.....wow...who wouldn't want to hear those words...Right?  I swear my eyes got that dreamy look in them just reading it!  Finally, they both get what they want and start dating and when they are together things are amazing for both of them.  Not only are they in love but their best friends as well.....it's sweet and adorable but one night in Vegas, after tending to a problem for her dad, everything goes down hill for Abby and Travis.  He thinks he's doing something good that will benefit both of them and Abby refuses to be with him if he chooses that path since she's been down that road before.  So things end and both of them are down right miserable....I was so pissed at Travis at this point in the book I wanted to smack him upside his head....a couple of times at that!

Even though they were broken up Abby still goes home with Travis for Thanksgiving since she told him she would and he was too scared to tell his Dad why they weren't together.  While there things start to change and Abby realizes she doesn't want to fight herself anymore and wants to get back together with Travis  especially after a talk she has with his Dad


"I've never seen him smile the way he does when he's with you.  I hope all my boys have an Abby one day."

Instead of asking for her back he finally gives her the out she's been wanting.  He wants to keep her in his life and is afraid if he doesn't let her go he'll lose her friendship.

Abby is absolutely miserable and it seems that Travis is back to his old self or at least not showing how upset he is over not being with her anymore.  She ends up going to the Valentine's Dance at Travis' frat house with one of her friends and after a night of both of them drinking and not exactly getting along, Travis has finally had enough.  He throws her over his shoulder, all cave man style...eeek!, takes her to his apartment and makes her sleep it off so they can talk about their problems and get back what they had

Back to sweet and adorable..... Abby and Travis get an absolutely beautiful happily ever after, although it's still full of drama but then again they are still in college.  All I can say is it was an addictive book, like a car wreck that you couldn't look away from...you  just had to know what was going to happen next to Travis and Abby.  Travis is like the ultimate bad boy...you know the super hot one that every girl would love to tame but really there will only be one girl that will ever get that pleasure?  Yeah....that's Travis and let me tell you it's so much fun to read ;)

Beautiful Disaster by Jamie McGuire is a definite must read!  It kept me up past my bedtime because I just couldn't put it down.  They had me in knots the entire story cheering for them to get together, make up, and find peace together.  Check it out, seriously, you'll love it!