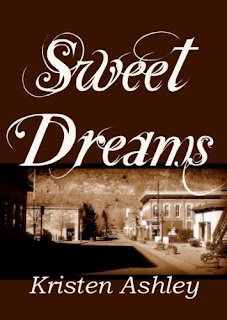 Sweet Dreams by Kristen Ashley is like Heaven in book form!  Smokin' hot bad boy bikers that know how to sweet talk a girl, some serious drama and suspense that will keep you on the edge of your seat!

Book description......
Lauren Grahame has spent her whole life thinking something special was going to happen.  So, after divorcing her cheating husband, Lauren searched for nothing special and she thought she found it when she landed a job as a waitress in a biker bar in Carnal. It was perfect: a nothing job in a nowhere bar in Nowheresville. Then Tatum Jackson walked in. Part-owner of the bar, he took one look at high-class Lauren and wanted nothing to do with her. The clash of the bartender and barmaid begins but, even though Tate makes his change of mind clear (in biker-speak, a language Lauren is not fluent in), Lauren is intent on going her own way.  Until a serial killer hits Carnal and Lauren finds out Tate isn't a bartender, he's a bounty hunter. He stakes his claim for Lauren before he goes on the hunt for a killer but Laurie doesn't speak biker nor does she understand bounty hunters and Tate comes back from the hunt to find his old lady has moved on.  Life throws curveball after curveball at Laurie and Tate as secrets are revealed, women are brutally murdered, Tate leads Lauren to special and Laurie tries to find her inner biker babe.

I'm going to start off by saying that Sweet Dreams was my first Kristen Ashley read (a few months back...and yes I know I've already reviewed other books by Kristen LOL) and let me tell you I knew at least half way through the book that I was going to become a life long fan of Kristen's work.  It was awesome, the entire story is so smoothly written that you can't help but become so consumed you feel a part of the characters and Tate....well Tate is simply put....A...MAZ...ING!!!!

Lauren...gosh how I would love to meet Lauren if she was a real life person!  She was sweet as pie and had the vibe about her that was so friendly you couldn't help but like her on spot!  After a devastating divorce from her husband, Brad of ten years, Lauren roams the country looking for the place that fits and she stumbles on Carnal, Colorado.  She's dreamed of having something special but after her husband cheated on her then divorced her she came to believe that her something special wasn't out there

Sad, I know...and you'll see that too especially after seeing what she went through, what her husband and friends did, how they treated her and you'll feel the hatred she does towards them after seeing how special She actually is!

So Lauren gets a job at "Bubba's" a local biker bar in Carnal and in walks her absolutely beautiful boss, Tate!  Tate has some things going on in his life takes one look at Lauren and wants no part of her being in his bar.  He takes Krystal (another awesome character and Lauren's other boss) in the back and tells her exactly how he feels about Lauren.... which let me tell you made me want to smack the bad boy right outta him... and he does it so loud that Lauren hears what he says and she is crushed.  His words hurt and he tries to talk to her and tell her to shake it off but she can't.  So they begin this little battle of him trying to get her attention and her avoiding him as much as possible and thus began the nicknames for each other....Tate called Lauren Ace and Lauren called Tate Captain.

Finally, Tate breaks through but because a serial killer is now on the loose and the Carnal P.D. asked for his help Tate has to go on the hunt.  He takes off after leaving Lauren with one hot kiss and his biker slang of which she has no clue of the meaning....

Ummm....I gotta admit I can't say I don't blame her because I would have no clue what it meant either, but while Tate is gone, Lauren starts something up with Wood - Tate's ex-best friend now enemy and Neetas (Tate's psycho ex-girlfriend)  brother.  Wood says some things about Tate that crush Lauren's crush for Tate and when Tate finally returns to Carnal and comes straight to Lauren she throws this in his face and he storms out after saying some more hurtful words to her.


A few days later Tate shows up to inform Lauren that she will be training some new waitresses and while there Lauren gets a call from her sister that her Dad is in the hospital.  She shuts down emotionally and Tate takes over, between him, Ned & Betty (Hotel owners and great friends) they do everything to get her home to her family in Indiana....get her showered, packed, and on a plane.  Tate stops everything going on in his life to go home with her and from there he confronts her ex-husband


"Then you shouldn't have thrown her away when she was your wife.  Now she ain't.  Now she's somethin' to me and I don't let men I don't like get close to her and I gotta tell you, man, I do not like you."

....Sigh....and here is where it begins...the sweet, wonderful, perfect, everything that is Tate!  They finally....FINALLY.... get on the same page and something beautiful begins.  Absolutely beautiful!  They talk about what happened while he was gone and Tate tells her how he went straight to her because she was all he could think about.  Then they talk about the things Wood told Lauren and after he tells her he knocks her socks off by telling her what he feels about her


"Two kinds of women get under your skin.  The ones who do damage, they don't feel good there but once you're fuckin' stupid enough to let them in you got no choice but to take the time it takes to work them out.. Then there are the ones who don't do damage, who feel good there, feed the muscle, the bone, the soul, not rip it or break it or burn it.  The ones you don't wanna work out."

Like I said...knocks her socks off....in his own Alpha-male way what he said was beautiful.

After she gets back to Carnal they start to get to know each other.  There are arguments, badass biker fights in living rooms, ex-girlfriends showing up in the middle of the night, half the town showing up to the bar to take Laurens back because of ex-girlfriends, ex-husbands showing up at work, a murderer on the loose, finding out about a 10 year old son, and lots and lots of sweet words.  Oh....a trip to the Mega Home Store and a conversation letting Lauren know the little things she's been doing to make Tate's house a home are welcomed but also letting her know when to draw a line

LOL'd at this....I mean cracked up, what he says is so straight forward but so funny ;)!

Lauren ends up meeting Jonas, Tate's ten year old son, and is nervous as heck but Tate says that he is just like him and he will love her because she wants him too and because she's taking the time to bake him a cake and make him special dinners.  And he does, thinks she's a MILF...another hilarious conversation where I giggled non-stop.

Drama picks up again starting the weekend she met Jonas...... Going for full custody of Jonas, Jonas' mother Neeta manhandling him, Neeta showing up drunk in the middle of the night.....again...., Sunny (another friend) going missing and found after being stabbed by the serial killer, having to talk to Sunny on behalf of the F.B.I. to get info on said killer, Neeta's posse confronting Lauren and watching Twyla (another friend) beat them all up, Serial killer striking again and getting Jonas' mother, funerals, meeting Tate's mom...who is a flighty bee-otch!, ex-best friends and ex-husbands showing up at Bubba's, and confessions of love.  It was a lot but then again their love shinning through and adding to it the love she had for Jonas and his love for her....it was beautiful.....it was sad, it was funny at times, there were a few "Are you kidding me?" moments....but still it was beautiful!

Then they get even more beautiful but I'm gonna let you see that beauty for yourself because it all brought tears to my eyes.  That is until Lauren is kidnapped by the serial killer who happens to be someone she knows.  It's crazy, it's intense but still it ends in happiness and this amazingly sweet book ends with Tate and Lauren's words they whisper to each other every night.....

I can't even put into words what this book did to me.....I mean seriously is it even possible that a man can be that perfect?  Not that Tate is exactly perfect in actions or words but my God, the man knows what to say and how to make his girl feel good physically and emotionally.

Sweet Dreams by Kristen Ashley is a book that I recommend to everyone...heck, I've already read it three times and not just a quick scan through either....., especially those who love a good alpha male that knows what he wants and gets it in his hot alpha male way ;)  I don't know how Kristen comes up with these amazing stories but I will say that I have yet to read a book of hers that I did not love and have not put on my reread list!  She is an amazing author with an even more amazing talent!  Not only are all and I mean ALL her characters perfectly built up but so are her secondary characters....everything about her books are awesome and everything I could possibly think to want in any book I read!  Seriously though....read it and you'll find yourself wishing for your very own Tate, even if it's just to whisper "Sweet dreams" in your ear every night!