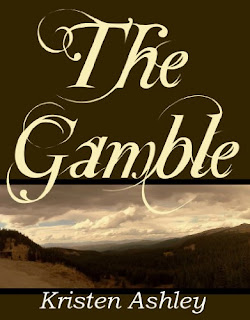 The Gamble by Kristen Ashley.  What can I say....The Gamble was another hit!  Ms. Ashley knows how to write 'em....or at least I think she does ;)  Filled with hot mountain men, murder, attempted suicide, tears, and falling in love this book with knock your socks off!

Nina Sheridan’s on a timeout adventure in the Colorado Mountains. Arriving in a blinding snowstorm at the A-Frame she rented, she comes face to face with the most amazing man she’s ever seen. Beyond angry because she’s flown half a world away to start her timeout adventure, not to mention her sinuses hurt, she heads back down the mountain and ends up in a ditch.
The next morning she wakes up in the amazing man’s bed and she’s sick as a dog.  Holden Maxwell spends days nursing her back to health and then he spends the next two weeks trying to convince her to take her Colorado adventure further, in other words, make it permanent and take a gamble on him.

Nina was an amazing woman.  She was strong, full of spunk, and so full of love you couldn't help but like her.  So Nina had kind of a rough ride down the road of love ....She had boyfriends that cheated, lied, were mean, and beat her so when she met Niles after her brother, Charlie, passed away she latched on so she wouldn't "feel lonely".  Only she did, Niles didn't listen to her....ever.... he was just kind of there.


Niles and I were never going to work and I realized that I'd known that for a long time.  I'd either fallen out of love with him or he'd bored the love out of me.


After thinking about her time out and all that Max (we'll get to him soon) had said about not giving his woman an opportunity to want a time out she decides that it's time to end it and she does this by sending an email explaining to him.....Again....why they won't work.


Okay so moving on to Max....ohhh yummy!  Max was a typical Kristen Ashley dream of a man.  Pure alpha as in he didn't take anything off anyone, knew exactly what he wanted and was NOT going to walk away with out it.


"Keep tellin' you when you're in my arms, I like you where you are."

.....sigh..... Max has a lot going on in his life....he's helping care for Mindy, his best friends little sister who is dealing with some pretty heavy stuff, helping out the Police in the murder investigation by bringing in Bitsy (the new Widow of the murder victim), and most of all just wanting to spend some time with Nina to get to know her.  The biggest thing going on for Max is trying to figure out a way to tell Nina about his dead wife, who passed away 10 years before but before he can tell her she finds out but doesn't say anything.  She wants him to tell her, feels like it's his business to share....but he doesn't.


He said no more and I waited, giving him his opening and he didn't take it.


In the mean time, they are both quickly falling for each other.  They have a bunch of stuff happen....ex-girlfriends throwing ice daggers when they look at you and starting fights when your at a nice dinner.  A sister making you feel like you're no better then the string of women who've been there before you.  Your Dad, who you do not speak to, showing up to lecture you about who to be with and making it clear your decision was a bad one.  Your mom showing up unexpected and going on around your new boyfriend like you've been with him for years.  A new friend that you've grown to really care about attempting suicide after your brother had committed suicide three years ago......a full plate for Nina and Max.

So while they're dealing with all of this, which does include still helping out other people, Nina tries to figure out what she really should do about Max.  She wants to be the love of someones life and thought she'd never be that for Max but because of the way he made her feel safe and protected she still made a decision


But being Max's second chance at something good was better than anything else I'd ever experienced.  Nothing else even came close.

So more stuff happens....there is no shortage of drama here......Nina's ex-fiance shows up and he and her father make Max an offer that royally pisses everyone off.   Max is there and let's Niles know what he lost....even though he still doesn't get it.....


"We've gotten to know each other, we both like what we know and, bottom line, you didn't take care of what was yours.  Now, as Nina has explained, you've lost it, I found it and it's mine."

....ummmm....Really hate to admit this because what he said is pretty juvinile but have to admit I got a little tingle

So Max and Nina deal with even more together.  The biggest was dealing with Mindy and the heavy stuff she was dealing with.  It brought tears to my eyes but it was beautiful seeing what Nina would do for someone she barely knew!  Nina asks Max.... why her? and boy does he give it to her.  I can't even repeat any of it cause it still kind of amazes me those thoughtful words....well that many at one time....could come from a Man....okay so it's fictional but still.... don't take away my excitement ;)  Anyway, those words melt Nina's heart and she realizes that she is something special to Max!

That same night they go out and Nina decides to show some compassion to a man, Harry,  who seems like a good guy but was royally just screwed over by a woman.  He doesn't seem to want her compassion and instead tells Nina about Max's dead wife


"This is somethin' he wants, Max'll do good by you but he'll know and the whole town'll know, you ain't that to him, what Anna was, you never will be."

Big Blow to Nina and her feelings and most especially the feelings she though Max had for her.


How could one minute, hope be so precious in my heart that I'd be something to Max, something special, the best he ever had.  And then the next....nothing.


"Told you, somethin's good, it's worth fightin' for but not if you're the only one fightin'"

So he takes off....you know to cool off.... but Nina doesn't see it that way.  She only see's what he said to her and that she's been selfish and has only been thinking about herself and what she's been going through the entire week.  But most importantly that he deserves better.  So she gets a cab and heads out of Gnaw Bone.

Unfortunately her troubles follow her and she gets worked over by a Man looking for his revenge.  But Max, who by the way thought they just had a spat that morning and was just wanting to cool off and for her to shake it off, found her, took care of her, and was there to bring her "home".   They get their chance to actually talk...or I should say, Max gets his chance to explain with out being upset and he tells her exactly what she means to him


"It kills me to say this, babe, the guilt burns so bad but, this week, I couldn't help but think about what life would be like with you and the ways it would be better than what I had with Anna"

So they head back to Gnaw Bone together hoping they've faced the worse....of course....they haven't and Nina ends up getting kidnapped in a parking lot.  First she is blindsided by who is responsible for not only her being kidnapped but also for the murder, then when it looks like it's going to be a permanent lights out for Nina she manages to escape and finds herself safe in the arms of Max!!!  FINALLY...... Nina and Max are able to have a beautiful life together.......Yippee!!!!!
As with all of Kristen Ashley's books.....I HIGHLY  recommend reading The Gamble.  I personally am not usually a fan of someone who has faced losing the love of their life and living life like they'll never find it again but I have to say this book made me feel the opposite.  Yes, Max was living that way but it was like once he saw Nina he KNEW life was about to begin again for him....Then again, it's the writing and the power of Ms. Ashley's creativity that catches me...hook...line....and sinker every time!  Take a chance and pick up The Gamble....