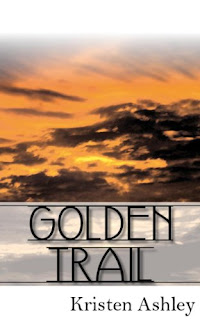 Golden Trail by Kristen Ashley was yet another hit for me!  I swear I can't get enough of these characters.  The Men are to die for hot (in every way) and the women are simply amazing (in every way)!


Tanner Layne and Raquel Merrick fell in love at a young and hard until Rocky left Layne with no answers and no going back.  Now years later Rocky is back in Layne's life working with him in trying to bring down a dirty cop and figure out what exactly is going on in town.  Layne has his hands full trying to figure out what's in Rocky's head, raise his teenage sons, and try and put the mystery of the dirty cop together all while realizing he is still in love with Rocky and will stop at nothing to make sure she doesn't take off this time.

Tanner Layne was one heck of a hot badass alpha male that totally rocked my world.  He's an Ex-Cop turned Private Investigator who roamed the country for twelve years and is  now back in The 'Burg to help raise his teenage sons.  After helping out The 'Burgs PD try and take down a dirty cop Layne was shot three times (a warning that he was getting too close).  Enter Rocky his ex-girlfriend from 18 years ago who left with no answers.  She gets pushed to try and reconnect with Layne over this because it cut her deep and she was still in love with him.  Layne was not happy about this at first and let me tell you he was a total jerk about it.


"We were good, baby, you remember.  So good, I'm surprised it took you a year to make that play."  He jerked his head to the house.  "But I'm not interested.  You want, I can shop around for you.  Bet a lot of boys in this 'burg would jump at a shot at you."

See?  Total Jerk!  But he didn't know at the time that she had left her husband two months prior because of infidelity and had been planning on leaving for a while because he treated her terribly!

He knew that her wanting to help out on this case with the dirty cop was a bad idea, especially the play she was wanting to make with it.  Therefore, they start a "fake" reconciliation as his cover to finish his job investigating the dirty cop and to rub it in her soon to be ex-husbands face after what he did to her but he finally comes around and realizes he is still in love with Rocky and even though she doesn't know it yet what they have isn't fake anymore!


"And that was when Layne knew it, seeing Rocky standing in his bedroom in her sexy getup and sexier high heels, her hair tucked behind her ear, her arms crossed on her chest, her concern for his son evident in her profile - Layne knew he was in love with her.  Not only that, he'd never stopped loving her.  Not once, not for a second, not for twenty-one years."


Layne had a lot on his plate...
Rocky obviously had something going on in her that he needed and wanted to figure out so they could continue to move forward.
Rocky's Dad and brother weren't helping him in any way other than telling him to proceed, which pissed him off on more than one occasion.
His ex-wife was a total bitch I mean TOTAL BITCH!!
He was trying to work his own cases plus the dirty cop case and a few other things brought to his attention.
His Mom was still hurt over Rocky leaving him 18 years ago and made sure to hurt Rocky at every turn and was not happy that his Sons obviously felt protective of Rocky.  So he had to step in and make his feelings clear


Rocky was great.  I loved it when Layne went to listen to her "To Kill A Mocking Bird" lecture, it was awesome, even made me want to pick up the book and read it again (which it's been a very long time and since I was in High School I probably didn't pay much attention to it).  I also loved how determined she was about her kids and their safety...she may not be a mother but she took her role as a Teacher who was protective of her students every seriously.  She also connected with them, made learning fun, gave them someone they could trust, but still put off that cool that all students look for in their teachers!  My number one reason for liking her was because she was funny in a sarcastic not meaning to be funny kind of way.


"Don't kiss me either," She hissed.  "I haven't read my contract for awhile but I think it has an express clause that I can't make out with seriously hot private detectives at football games or during any other school activity."

Rocky wasn't quite as strong as most of Ms. Ashley's other heroines but she was not weak.  She just had a lot going on in her head that needed sorting that really should have been sorted twenty four years ago but Layne being the man that he is and the man that is so much in love with her he was determined to figure out what was going on and see her through it.


There was a lot of love in this book....The Love Layne had for Rocky was simply beautiful and seeing that love reciprocated was breath taking!


"Thank you, baby" she whispered.  "For what?" he whispered back.  The side of her nose brushed his.  "A beautiful life."


"Because if I couldn't have it, it felt good to be able to spend time with it in my head"


Golden Trail was a bit different for me because the P.O.V. was all Layne and usually that would turn me off because I want to read through the female lead's eyes because I relate better and if the book is that good can feel what she's feeling but with this book I was NOT turned off.  Tanner is one heck of a guy and even though we didn't get a P.O.V. from any one else I could still feel what I was reading.  To me this is HUGE and makes me appreciate the phenomenal writing power Ms. Ashley has!  On that note pick up the book it will definitely not disappoint!