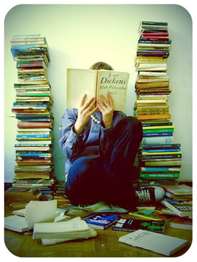 When do you give up on a book?  When do you decide that you've given it your best shot?  I'm asking these questions to myself right now.

I'm in the middle of a book and I'm struggling with it.  It's not horrible, it's actually not even bad but at the same time it is bad...it's like a train wreck and I can't look away.

Here are my issues:

*The characters aren't bad, the author has introduced them quite nicely... However....they have so many flaws that I'm constantly raising an eyebrow or thinking "Are you serious?"  It seems like one minute they're acting their age but the next minute they come across extremely immature. When I say they have flaws I don't mean it in the sense that the character build up is flawed..... I mean it in the sense of if these were real people.  She comes off as too desperate and maybe even has a touch of a multiple personality disorder.  He comes off as extremely fun but also a little on the psycho side.

*The story line isn't bad, I mean who doesn't like an overprotective, possessive, alpha male every now and then?   But this one is a little over the top.  I just can't see the reality of it, I just don't buy it...any of it really.  Then there's the heroine and her use of endearments or her referring to specific parts...The endearments fit her personality but one in particular just annoys me to the point of rolling my eyes but her references to her body parts are so not what a woman like her would use nor do I as a female reader really enjoy seeing a heroine say.   It's not the I dislike the word but there is a place to use it.

I really wanted to like this book.  I really did!  It actually got an average of 4 stars and the description and reviews I've read tells me that it's a book I'd really enjoy!  But so far I'm not, I can't find the enjoyment.  I'm about 47% finished on my Kindle but I have to admit I wouldn't be upset if I didn't finish....actually I've considered just moving on to another book and possibly coming back to this one numerous times already.  BUT....like I said before - it's like a train wreck that I can't seem to tear my eyes from while I'm actually reading.


I'm not going to tell you the name or Author of the book other than to say this is the first book I've ever read of hers.  I won't tell you and here's why.... I think if I did it wouldn't be fair to the book or the Author.  I'm sure she worked extremely hard on her work and I admire anyone who takes the time to not only do something creative they like but they're proud enough to share that creativity.  I can not take that away from the Author and having said that I often get frustrated reading reviews where the author and their work is trashed for something the reviewer didn't like.  We all have our opinions and have the right to voice them but there is always a tactful way to voice that.

Even with the knowledge that no one but myself will know what book I'm referring to, I still want to take the time to wish the Author luck and give her a virtual pat on the back for believing in herself and her work enough to share it with others!
Posted by Lori at 12:15 PM