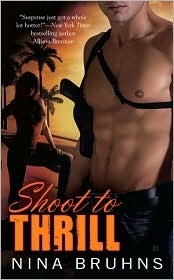 Shoot to Thrill by Nina Bruhns is a decent read especially when feeling the need for a break from Bad Boys or Kristen Ashley's super hot Alpha Males ;)  With Shoot to Thrill you get a dangerous Military man...need I say more?


A sexy black-ops hero Kyle 'Kick' Jackson and a beautiful ER nurse Lorraine 'Rainie' Martin must fight for their lives-and for a love they never thought possible.

Let's talk about Rainie first because I have so much to say about Kick I'm afraid I'll forget to praise our sweet but scared heroine.  Rainie, like I mentioned, is a sweet, caring E.R. Nurse who was hauled to a speed dating get together by her best friend, Gina, where she meets Kick and she knows after immediately setting her sights on him that she wants him


He looked hard.  Jaded.  No-nonsense.  Dangerous.  And intriguing as hell.

So after he comes up to her and asks to buy her a drink after introducing himself as the great "Dr. Nathan Danby" they head out to um....spend some time together...yeah that's it.  Anyway, they don't get to far before he lands a hot one on her!  Because of the situation Kick is in he is paranoid, some things happen and she ends up having to take him back to her apartment....at gun point.  She finds out he really isn't Dr. Danby and then finds out what he really needs and decides to go ahead and help him even though she plans on not being happy about it....LOL....like that really lasts long because he sure got her under him pretty quick if you know what I mean....all I can say is ummmm...Yowza!

Okay so Kick is like this super hot but injured and scarred Military man who works for a special unit in the CIA to which he signed a contract years ago saying they could call him back whenever they wanted, only he didn't want to go back.  After months on the run, they catch up to him and unfortunately catch up to him at Rainie's apartment and in a very bad situation....not what you're thinking so get your head out of the gutter ;).  Moving on.... so they take both him and Rainie off, help him out with his "problem", blackmail Rainie into staying with him to monitor the problem, and ship him off to Africa for his next mission.  But the plane they're on is hit by terrorists and they're forced to bail.  So now it's just him, Rainie, and a fellow soldier Marc.

What I need to mention real quick is that Rainie has a major and I mean MAJOR fear of cars, buses, planes, you  name it, because of a car jacking going horribly wrong when she was young where she lost both her parents.


"Kick.  In case you hadn't noticed, I'm afraid of pretty much everything."

Okay so the three of them are traveling across the desert.  Marc is severely injured and they are dodging terrorists while trying to make it to a medical camp so Marc can get treated and Rainie can get back to the states which means back to safety.   During all of this, actually for a while now, Kick has been struggling with whether or not he is a good guy or a bad guy


Was there a difference between him and the villagers, or even the bads?  Was he bien mauvais drigaille, too, because of what he did?  Even if it was in a good cause?

Rainie knows that even though Kick is a dangerous man, he is a good man who will protect not only innocent people but her.


Knowing a man could protect her, would not hesitate to kill to protect her, if need be...that was a mighty powerful thing.  Was she a sicko for being relieved to know that about Kick?

Together, Kick and Rainie go through all these dangerous things trying to get to where Kick needs to be in order for him to complete his mission, even though he is seriously not a happy camper that she is coming along because he wanted her on a plane headed back home!  During all this they are silently working out their feelings for each other


The realization that it didn't matter what he'd done in the past, or what he was about to do.  Nothing could make her change the way she felt about him.  She'd love him anyway.

The woman he loved.  He slammed his eyes shut.  Ah, hell.  He couldn't deny it any longer, could he?  He loved Lorraine Martin.

Watching them working it out in their heads was pretty interesting, I have to admit I enjoyed watching Kick fight his emotions every step of the way...Men can be so entertaining sometimes :)

Finally they get to their intended destination and start to prepare for Kick's mission but a couple of things happen and things don't quite go as planned, actually they go pretty badly.  But never fear this is a romance novel after all ;)  and let me tell you things get pretty sweet after that kind of like I'll end up with a cavity sweet but none the less a happily ever after is in this couples future!


"I love you with all my heart, Rainie.  Please say you'll marry me."

While I say that...Yes, Shoot to Thrill was a decent read I have to admit that I don't necessarily see myself reading it again.  It was more suspense than romance and while there was still the romantic love story with a super sweet ending it was just a little too much action for me even though I really did like both characters.  I also found the secondary characters and their little, almost, short stories rather annoying, but the book still held my interest.  If I were to rate it as a whole it would get a solid 3.5 stars from me.