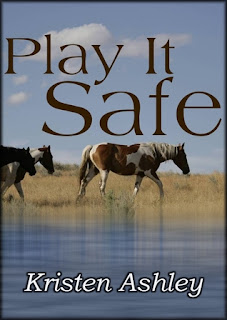 Play It Safe by Kristen Ashley was fan-freaking-tastic!!!  I can not even begin to explain how much I love Kristen's books!  So far they've all been awesome.  I have started to wonder about my sanity though because it seems when it comes to the power of Kristen's creativity and writing style I end up completely consumed by these characters and I fall in love with the book.

Book description
No connections. Play it safe. These were the rules Ivey lived her life by. Until she hit Mustang, Colorado, a perfectly imperfect town where the citizens were welcoming and one of them included the tall, beautiful, macho man rancher cowboy, Grayson Cody. On the run for a decade, Ivey knew she was supposed to play it safe. But she was tired of being on the run. She wanted a normal. She wanted real. She wanted a home. And she wanted Grayson Cody. And Grayson Cody wanted Ivey. No one who looked at them couldn’t see they belonged together. There was one man in this world for Ivey and one woman in this world for Grayson Cody. So they fell in love. But just as quickly as they fell together, they were betrayed and torn apart. Separated for years, Ivey was certain her life would not include her rancher cowboy. Until the town of Mustang reached out to her when Gray was in trouble. Even though she thought he broke her heart, she charged in to help. Then Gray and Ivey discovered they were betrayed and, not only that, Gray had an enemy who would stop at nothing to defeat him

I'm going to try something a little different here....normally when I write a review it's on a book I have either read more than once or I've done a quick speed read through the parts I want to concentrate on in my review.  This one I did not.  I just finished it and wrote what was fresh on my mind and just a little warning.... my mind is running on total fumes because I may or may not have been up a little...ummm okay a lot... past my bed time reading and not able to put my kindle down even though my eyes were burning ;)

Ivey Bailey is a twenty two year old woman who has been on the road (living out of hotels) with her brother, Casey, for the past 10 years.  Casey did what he had to do to protect and provide for his sister and even though he loved her he never provided any kind of a life for her.  Ivey had only wanted two things....a home and a family!  I liked Ivey...I mean really liked her!  She was sweet, she's beautiful but doesn't know it, she's caring, and after being on the run she is still innocent.

So her and Casey end up in Mustang and after only days there she runs into trouble from the local rich boy who's used to getting whatever he wants.  That's when Gray steps in, helps her out, and ends up taking her home with him so he knows she's safe.  Ivey plans on hightailing it out of Mustang the next morning but Casey has found love and decides he wants to stay...so because, like always, Ivey gives in and they stay


"Glad his shit kept you in town dollface."  he whispered.  I nodded again.  I was glad too.  Very glad.

Ivey and Gray start dating and Ivey falls in love fast and hard with Gray!  She's also planting some roots and has fallen in love with Mustang and everything she has created for herself as her new life.  She got a job as a waitress and she is elated to know that she has cash and it's cash that she earned and earned the good old fashion way.  After yet another fallout with her brother....this time public....Gray lets her know what she's doing for herself is good, that she's on the right path, and ends up confessing his feelings while at it


"You still fallin' in love with me?  I stared, my cheeks now getting warm and opened my mouth to answer affirmative when he went on.  "Cause you should , baby, I'm already gone for you."

Just as Ivey is realizing she is exactly where she wants to be and has planted her roots in Mustang and loves them there, tragedy strikes in the form of Casey.  He's been badly beaten and gets her back on the road with him for three months before she returns to Mustang, just like she said in her note she left to Gray.  But, to her, it seems that he's moved on, so she moves right through town and straight to Vegas and into a job as a showgirl.

Here is where we meet two fabulous men who would do anything for Ivey... Lash, her fake-gay-boyfriend/B.F.F and Freddie (Brutus...Ivey's nickname for him lol) her bodyguard and friend.....Oh how I loved Lash, I wish I had my very own Lash!

After getting a call, 7 years later, she finds out that Gray is in major trouble so without taking anytime to sit and think about what she's doing she heads off to Mustang, with Lash and Freddie following, to help him out.

Gray finds out what Ivey has done and follows her to her hotel room to confront her.  He's pissed and not just because she showed up to bail him out of trouble but because she just took off on him....he never got the note she left for him 7 years ago.  They have a few words and quickly discover they'd been torn apart.

When Gray gets a little push from Lash and Freddie, after he finds out the entire truth about Ivey's past and how she still feels about him, he makes his feelings known and they find themselves back together where they should have been for the past 7 years.


And when I made it the two steps to him, I was right.  Right where I wanted to be, right where I belonged.  Held tight against the long, lean frame of Grayson Cody

Ivey ends up back home in Mustang.  She's so nervous that the town won't accept her back because even when she tried to make those connections back when she had first left with Casey they had all turned their backs on her.  But now, knowing the truth about what happened to Gray and Ivey, what Ivey did for Gray and in turn what that did for the town, they welcome her with a standing ovation, hugs, and lots of "Welcome Home".

Trouble wasn't over for Gray and Ivey.  Whoever had ripped them apart was determined to continue to mess with them.  So they dealt with it as best they could.  They knew who was responsible for ripping them apart and they knew that same person was responsible for the trouble that had been caused but there was no real proof so he remained free to do as he pleased.

But this didn't stop Gray and Ivey from continuing on with the happiness they once again found and were determined not to lose again.  That happiness was special and even though they lost the 7 years they should have had together, they made sure to cherish each moment they now had


Then it hit me I was in a swing when I first met Gray.  And now we were in a swing together on the porch on his house on his land.  Him and me

Play It Safe by Kristen Ashley is one of those books that pulls you in so tight you can't help but feel for the characters and what they're going through.  You feel their happiness, their heartbreak, the relief of finding their way back, and their sadness at the different losses they had to face.  I fell in love with this book and I mean to the point where it wasn't just Gray who had me in knots, it was their entire story, it was the secondary characters, and it was Ivey and the tragic life she led only to find what she had always truly wanted.  No worries though Gray had that whole perfect alpha male that had me drooling and craving more but of course he would because he's one of Kristen's men and if I've learned anything from her books it's that Kristen Ashley KNOWS how to write a man....a perfect man!!!!

Definitely check this book out.  It's already on my reread list and if this tells you anything I'm still thinking about Gray and Ivey and wondering if maybe I should just pick up their story and read it again.....crazy I know I just finished it.....but it really was THAT good!