Catch Me If You Can (New Orleans Trilogy #1) Review 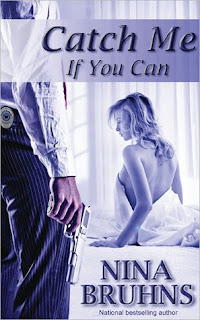 Catch Me If You Can by Nina Bruhns was a sweet romantic read with a bit of suspense and a sweet cajun man.

Simon "Beau" Beaulieux oozed sensuality -- from his bedroom eyes to his broad shoulders to his lilting Louisiana drawl. Kit Colfax knew the parish sheriff always got what he wanted, but to protect her future she couldn't let him have his way... or her. Kit sought to put Beau's thieving cousin behind bars. Beau sought to stop her. And painful experience had taught Kit how powerful men operated... and manipulated. Well, not this lady. Not this time. Sure, Beau made her FEEL as she never had before. Made her WANT to trust him as he so unwaveringly trusted in his cousin's innocence. But was that a lover talking, or a deceiver bent on saving his family... whoever paid the price?

Kit wasn't my most favorite heroine but I still liked her.  She was determined to save her job by getting her man, Remi, behind bars and getting the stolen jewelry of the clients her company insured.  Thinking she was playing Remi at a private poker table in Vegas, she lost not only her necklace but her dress as well.  She knew he was bad news but she couldn't help the feelings he brought up in her.


Again his lip curled in that roguish smile and her temperature kicked up about ten degrees.  Man, oh, man, it should be illegal to look that sexy.

She convinces him to let her win the dress back only he has other things in mind but he gives in with the promise she can try to win it back in the morning.  So she leaves without the necklace or the dress thinking she's got her man right where she wants him only to find out she didn't have the right man.

Beau was trying to find his cousin to get back his Grandmothers jewelry he had stolen before anyone in the family found out.  He was posing as Remi to try and draw him out when he met Kit.  He had a potent reaction to her and knew with out a doubt that he wanted her like he's never wanted any woman


An immediate, primal recognition coursed through him.  Incredibly, in the few minutes he'd stood close to her, her unique smell had imprinted itself on his brain.

Both Beau and Kit are a little leery of each other and the relationship they both had or wanted with Remi.  It certainly didn't stop the undeniable chemistry between them....all I can say is Beau even had me breathing a little faster while I read about him "kiss a woman without touching her"....and you'll have to read it to find out if he actually does "touch" her anywhere including her lips ;).

Beau takes off for San Diego after getting word that's where he was but makes sure to leave an obvious trail so Kit can follow him.  He was still struggling with his desire for her and didn't know how he should greet her once she arrived at his hotel in San Diego...a kiss or handcuffs?  He also made sure to call his Deputy back home to run a back round check on her


He wanted to know everything about his delicious, dangerous kitten before she showed up at his hotel door.

Of course she follows him and they work out a deal to search for Remi together while fighting their feelings and thoughts for each other.  It was cute how they both fought their attraction for each other stopping mid-thought to question their own thoughts of falling in love with the other.

After baiting Remi, Beau and Kit find themselves unable to deny their passion any more.  Both of them becoming aware of their feelings for the other.  Kit had learned the hard way not to fall for powerful men and tried so hard to deny her feelings for Beau, knowing what would come once she gave in to them and not willing to give up any part of her life.  Beau knew he wanted Kit like nothing he'd ever wanted before in his life and planned to figure out a way to get him back to Louisiana in his house with him but knew he'd have to tread carefully


"I won't ever hurt you.  I swear,"  he vowed softly, placing gentle kisses on her eyes.  When they opened, they were shiny with tears.  A wave of incredible protectiveness washed through him.

Unfortunately when Kit baited Remi, she did too good of a job.  He had somehow gotten into their room and stolen the necklace that Beau had won in their hand of poker.  Beau and Kit find out that Remi was headed south to see family and after Kit is shot at Beau finds a way to get her in his home.

Going on with the search for Remi while staying in Beau's home and tagging along with him on his daily errands she continues to fight what they could have.  They haven't so much as kissed since San Diego because Beau promised to be a gentleman after she let him know with a finality in her tone that once Remi was caught she was headed back to New Orleans.  Her thoughts are constantly battling between what she thinks she wants and what is real


She felt comfortable with him.  She didn't have to pretend she was something she wasn't.  When was the last time that had happened with a man?  Never.

Beau knew he was in love with Kit and knew that touching her was only going to make things worse so he told himself and eventually her, after she made a play for a repeat of what happened in San Diego knowing she was leaving the next day, that if she couldn't give him more than one night he couldn't do it at all.  But eventually they end up exploring what could be between them.  Only both of them have different ideas of continuing the relationship....Beau wants her to move to his home and be his wife (even asks her) and Kit wants to go back to New Orleans and spend weekends possibly more with Beau.  Kit tells him she needs time to make that big of a decision to rearrange her life and Beau takes it as a brush off and questions himself if he loves her enough to let her go.

After getting a mysterious letter Beau takes off in the bayou and Kit follows.  She's thinking he's going to betray her and go warn Remi so she loses her job and accepts his proposal.  She follows him to a shack and finds him on the floor with gunshot wounds and Remi kneeling over him.  Remi tries to help him while waiting on the paramedics and helicopter.  She's terrified something will happen and she'll never get the chance to tell Beau how she feels

Once released from the hospital and able to get up and move around, Beau goes in search of Kit with the intentions of begging for her forgiveness but she's quit her job and abandoned her condo in New Orleans.... don't worry though, he tracks her down to her home town and let's her know exactly what he wants


He cradled her cheek in his hand and gazed at her lovingly.  "Anywhere you say, chere.  Just tell me and I'll be there.  I need you in my life and I'm willing to go anywhere you want to be."

Her dream come true!  She realizes how much he truly loves her if he's willing to give up his family, job, and home to move where ever it is she wants to live.


She hugged him close and held on for dear life.  "I love you so much.  And there's nowhere else on earth I'd rather live than Terrebeau."

Their happily ever after was sweet.  Kit gets what she wants just by knowing the man she's fallen for would do anything to make her happy and loves her enough to give up his life and Beau gets his dream by having Kit as the Lady of Terrebeau, his family's plantation.

Catch Me If You Can was a sweet romantic story.  Normally I like for a book to completely consume me to the point where I feel like I'm a part of everything happening but this book didn't.  But I did still enjoy watching Beau and Kit fight their feelings until finally giving in to the love they both felt.  I'm still undecided if I would want to reread this story right now or not....I'm sure I'll make up my mind once I'm in the mood for a sweet as candy love story though ;)  If you're into hot cajun men who have that sexy southern drawl and speak sweet nothings in french then I would recommend checking out this book....it's why I read it, I have a thing for cajun french, there is something out it that's a major turn on ;).