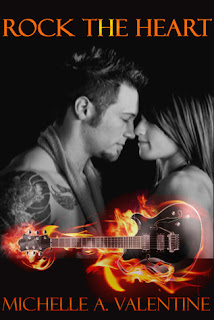 Rock the Heart by Michelle Valentine

Book description…
For the last four years, good girl Lane has regretted breaking up with Noel Falcon. She thought she was sensible when she told him his dreams of being a rock star would get him nowhere, but now that he's a rock god and her career is stagnant, she realizes just how wrong she was. When Noel hires the marketing company where Lane is an intern, she’s forced to see him again. If she wants to land her dream job as executive within the company, she has to win him over and secure his account. Too bad Noel is still pissed at her for breaking his heart.
When Lane’s company flies her to a Black Falcon concert to gain Noel’s attention, emotions run high the moment she sees him and realizes she’s far from over him. But Noel’s countless trysts with groupies and his cocky attitude make Lane believe he isn’t the same guy she once loved—now he seems to only want her body. Then after Lane discloses she needs him to procure a job, Noel proves he’s a changed man by forcing her to go on the road with him in order to get it.
After Lane reluctantly takes Noel up on his offer, she becomes willing to do whatever it takes to keep him satisfied, even if it means succumbing to his seductive ways. Lane soon finds deception is a dangerous game and she’s not the only one playing.

Well hello bad boys of Rock… Noel, Riff, Trip, Tyke, Striker?  Where can I get my autograph… where I’d like it I’ll keep between me and the boys ;)  We all know how big Rock Star books are at the moment and I will be the first to raise my hand and say I LOVE myself a good one.  But I have to say they’re starting to get a bit repetitive.  The same angst always plays out and can I just say that I am so sick of the whole cliche’ of the groupies ruining the relationship, or the whole he cheated because he’s a rock star… Saying that, I’d like to give Michelle a big ole cyber hug { (((HUGS)) Michelle } because even though she’s got a few angsty moments, she took Rock the Heart somewhere else and made it into something heartwarming.

Lane and Noel have known each other for years, they had a passionate and sweet relationship up until Lane decided it was time to end it.  Both were heartbroken, Noel a little more so because he didn’t understand it… and quite frankly I don’t blame him.  I would have been pissed and written a song called “Ball-Busting Bitch” about Lane myself!  But Lane is hurt too, she loved Noel, never stopped, and seeing his antics all over the media has crushed her.  So when she is basically forced to see him face to face, and then travel with him, she figures she better get that shield up in place and keep it there.

Obviously it doesn’t stay there… because well, he’s Noel, you wouldn’t be able to keep a shield up either.  Personally I don’t think I would have put it up anyway, he’s too hot not to give a chance to… even if he is kind of a jerk.  But when they do finally come together it’s clear that Lane’s decision to build that shield is necessary because Noel is quite irresistible.

He’s sweet but possessive.  He’s loving and affectionate.  But then again he’s hiding something.  Will that something break them apart or bring them closer?

Rock the Heart is a definite read, especially if you like your Rockers to be hot and talk dirty… and boy do I ever… so much so, that I am more than anxious for more Lane and Noel!!!