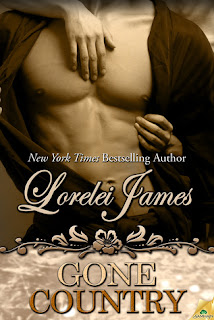 She’s a little bit country, and he’s…not.
Arizona businessman and long-lost McKay love child Gavin Daniels has been awarded sole custody of his teenage daughter Sierra for one year. In order to steer Sierra back on track after a brush with the law, he pulls up stakes and heads to Wyoming, looking for support from his ranching family...even if he isn’t sure where they fit in the McKay dynamic. He’s prepared for every contingency with the move: the less-than-enthusiastic response from his daughter, learning to run his corporation remotely, but he’s thrown for a loop when his new housemate, Rielle, is a whole lot sexier, funnier and sassier than he remembered.
Rielle Wetzler has finally overcome the stigma of having hippie parents and being a young single mother. In the two years since she sold her ailing B&B to Gavin Daniels, she’s become financially stable running the homespun businesses she loves. But now Gavin is in Sundance to claim the house that’s rightfully his. Although Rielle knew this day would come, she isn’t prepared to leave the home she built for herself and her now-grown daughter. And to further complicate matters, her long-dormant libido is definitely not ready to live with this newly buff Gavin—who isn’t a cowboy, but has the take-charge attitude to prove he’s all McKay.
Sharing a roof, their troubles and their triumphs is too much temptation, and before long, Gavin and Rielle are sharing a bed. But sharing their hearts and lives forever? That’s a whole ’nother ball of wax.
Warning: Contains a feisty, independent heroine who doesn’t need a man to take care of her needs outside the bedroom and a sweet, sexy and bossy hero who’s up to the challenge of proving her wrong.

Gone Country Excerpt:
Rielle had just popped the top on a bottle of Moose Drool beer when Gavin wandered into the kitchen.
Speaking of drool. Man, oh, man. The last year had been very good to him. He’d always been attractive in the charming and confident manner of a businessman. But since she’d last seen him, he’d slimmed down and toned up to the point he was almost…buff.
She’d chalked up his previous physique—or lack thereof—to sitting behind a desk all day. But his appearance had undergone a serious change in the last year. He’d chopped off his wavy dark brown hair in favor of a modified buzz cut. Now his blue eyes, framed with ridiculously long black eyelashes, were his most striking feature. He sported a neatly trimmed goatee which accentuated his leaner cheeks and the strong line of his jaw, both more prominent with his overall body weight loss. The man still didn’t smile as much as he should, so her heart skipped a beat when he leveled a smile at her.
“Don’t suppose you’ve got an extra one of those for me?”
“Extra what?” Why was Gavin staring at her mouth? Why did she have the urge to lick her lips?
“An extra beer.”
“Oh. Yeah. Sure.” Get it together, Ree. She reached into the bottom shelf of the refrigerator. When she turned around, Gavin was right behind her—checking out her butt.
He blushed and stepped back. “Sorry. I don’t expect you to wait on me, Rielle.”
She handed him the beer and the opener. “Maybe we oughta talk about our expectations.”
Gavin nodded.
“It’s a beautiful night. Let’s sit outside.”
He motioned for her to lead the way.
She flipped on the lights lining the walkway and lit the kerosene lamp on the table between the glider swing and her favorite rocking chair. She curled up in the rocker, setting it in motion as Gavin settled on the swing. The kerosene flame flickered in the breeze behind the glass chimney, throwing a golden glow against the house. Neither she nor Gavin said anything for a few moments. Normally silence didn’t bother her, but tonight it did. “Sierra get settled in all right?”
“It helped having her stuff already here. I have to admit I’m happy each bedroom has its own bathroom. The girl is spoiled. She’s never had to share a bathroom with anyone.”
“Rory and I shared a bathroom until I built Sage Creek. Even then, she came into my bathroom to get ready in the morning. Come to think of it, she still does that.”
“It sucks that Sierra isn’t willing to share any hair care tips with me.”
Rielle laughed. “Was it her idea or yours to get the buzz cut?”
Gavin buffed the top of his head with his palm. “Mine. I started to see some gray and I’m not ready to invest in Grecian Formula for Men, so I bought a pair of clippers and hacked it off. I save myself fifty bucks a month at the barber.”
“Well, it looks good. Really good.” Feeling stupid for tossing out a compliment, she angled her head away from his prying eyes.
“Thanks. I have to admit I didn’t recognize you with your short hair.”
“I’ve heard that a lot in the past few days.” Rielle felt his eyes on her, measuring her, but she couldn’t meet his gaze.
“So it’s a recent change?”
“Last week.”
“You look great, Rielle.”
“Thanks.”
More silence.
Rielle peered up at him, only to see him staring at her. “Gavin. Can I be completely honest?”
“By all means.”
“How is this situation going to work?” 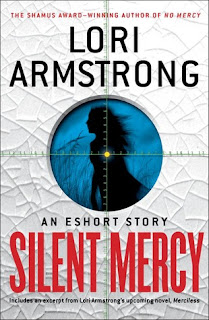 Blurb
Recently returned from training at Quantico, FBI agent Mercy Gunderson stirs up trouble and uses her rarely seen feminine side to seduce her unsuspecting boyfriend, sexy-as-sin Sheriff Mason Dawson. When she revs up her Viper to get his attention while he’s on patrol, tempers and sparks fly—but their rendezvous is interrupted by a disturbing cry for help. The pair rush to the scene, where Mercy discovers that even though she can’t always save the day, she doesn’t have to be silent about it.

Click here to get your free copy of SILENT MERCY
http://loriarmstrong.com/
Tour prize
Lorelei is giving away, winner’s choice, a Nook or Kindle, up to $250 value, to one winner from all the different tour stops. Winner will be selected via Rafflecopter on 12/12.