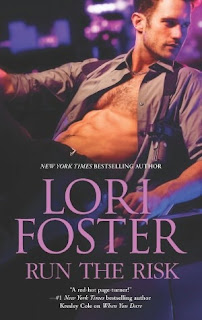 Run the Risk by Lori Foster

Book description...
When Detective Logan Riske goes undercover to find Pepper Yates, a potential link to his best friend's unsolved murder, he vows to gain her cooperation by any means necessary. But the elusive beauty is more suspicious—and in far more danger—than he expected. And the last thing Logan needs is to start caring for her….Pepper has spent years dodging the corrupt club owner who will stop at nothing to keep her silenced. She can trust no one, not even the handsome new "construction worker" who's moved in next door. The heat between them is undeniable. But will surrendering to passion bring her the safety she so desires—or will her feelings for Logan draw them both into a killer's crosshairs?


I'm on this kick at the moment... I'm over all the angst at the moment and totally dedicated to suspense and maybe a little bit of drama.  Normally, I'm all into Military Romantic Suspense novels but it seems as though I've hit a dead end... so this time I've turned to the next best thing - Detectives!  That's right... Run the Risk may not not have a sexy as sin SEAL but it certainly has a smokin' hot detective!

In all honesty I really wasn't sure if I was going to be able to get into this book because hearing a hero basically call the heroine an ugly duckling, kind of turned me off... I know that seems shallow but in my eyes the hero should take one look at the heroine and think "Wow, she's gorgeous!"  So not the case here but his thoughts on her looks become unimportant.   For one he knows there is something about her that he wants, he feels that protective urge, and his curiosity is more than peeked and it's not just because he knows who she is.  So I got over it and I'm so glad I did!  Logan is rough around the edges to the point where I seriously couldn't get enough of him and wanted more.  He's tender yet bossy as hell and he would do absolutely anything for those he loves... especially Pepper!

Pepper wasn't exactly a favorite heroine for me until something happens and she blossoms into the woman she really is.  She's a quick thinker, loyal beyond belief, and out to make things right... even if it's at the cost of her own life.  She's feisty and has this playful ability to hold a grudge... She leaves you thinking that she's going to give in and then BAM!  the girl puts you right back in your place.  It cracked me up!  But she also made me roll my eyes... I understood why she thought things needed to be the way they were but I couldn't help but get aggravated with her when it came to her... whatever you want to call it... with Logan.


Their relationship was started on lies which was hard for me to wrap my head around because they were both feeling such strong feelings for each other as the lies piled up.  But it was clear these two were meant for each other.  He had never felt so strongly for a woman.. especially so quickly after meeting her... and she couldn't quite keep her hands to herself as well as worrying about his safety... even though she didn't want to admit that.  They were sweet and steamy together.

Run the Risk is a risk worth taking!