Fight With Me (With Me in Seattle #2) Review 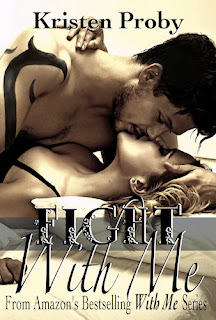 Fight With Me by Kristen Proby

Book description...
Jules Montgomery is too busy and content with her life to worry about a man, especially one Nate McKenna. If growing up with four brothers has taught her anything, she knows to stay away from sexy men with tattoos and motorcycles. That goes double if he's your boss. During the one incredible night they shared, he violated the no fraternization policy...among other things, and it won't happen again. Jules won't risk her career for mind-blowing sex, no matter how much her body and her damn heart keep arguing with her.
Nate McKenna could give a shit about the no fraternizing policy. He wants Jules and he'll have her. The rules could bend around them, or be damned. He's not a man to be taken lightly, and Jules Montgomery is about to find out just how he responds to being pushed aside after the best night of sex he's ever had. She can fight all she wants, but he'll have her in his bed in the end.

I know it’s only the “second” book in the series, okay I guess really it’s the third if you count Stacy and Isaac’s novella – Under the Mistletoe with Me… but I have to be honest and say this one so far…. Is my favorite!  Seriously!  I was able to see where Kristen had gained more confidence in her writing and it also helps that Nate and Jules are just downright entertaining!

Jules is so my kind of girl.  She works hard and plays hard.  She’s strong and has this air of confidence that I’m extremely envious of… Seriously!  I wish I felt even half as confident as Jules does in life… and by saying that I mean that Jules seems to be confident in just about every single thing she does.  She’s funny, loving, supportive, and an all around good person.  Plus she’s a badass… the gym?  Cracked me up! For the most part she knows exactly what she wants in life and she’s not afraid to go after it… but she’s terrified to risk her career for the massive amount of chemistry she shares with her boss… her very sexy boss, Nate.

Nate is a different story all together… the man is freaking intense, which makes him freaking smokin’ hot.  He does come on a little strong at times but that’s because he knows exactly what he wants and plans to get her one way or another.  He’s confident in what he shares with Jules and knows his feelings are stronger than what he’s ever felt before.   On top of his intensity, he’s got this soft side that just makes your heart melt and fall that much harder for him.  But when he’s pissed – watch out – it’s scary intense and it’s freaking off the charts sexy all at the same time!  When you get to the ‘staircase’ scene… you’ll totally understand what I’m talking about.

After playing just the boss for a while, Nate decides it’s time to make his move… the one where he makes Jules someone permanent in his life and he’s sneaky about it… actually he’s a sneaky little bastard about a lot of things – ALL of them good ;)  But they also face their share of drama… not only between each other but also because of other people trying to interfere in their lives.  These two have a lot more to overcome than Natalie and Luke did and it was fun to tag along on their journey!

I truly enjoy Kristen’s work… she doesn’t do a lot of angst and the situations she has her characters face are realistic in a way that I can connect with them.  Now, after having said all of this I have to say – I’m ready for more of these Characters – I’m past ready for Will’s book!