Cover Reveal & Excerpt: Fight With Me (With me in Seattle Series #2) 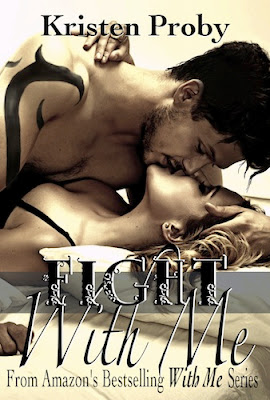 Fight With Me (With Me in Seattle #2) by Kristen Proby

Jules Montgomery is too busy and content with her life to worry about a man, especially one Nate McKenna. If growing up with four brothers has taught her anything, she knows to stay away from sexy men with tattoos and motorcycles. That goes double if he's your boss. During the one incredible night they shared, he violated the no fraternization policy...among other things, and it won't happen again. Jules won't risk her career for mind-blowing sex, no matter how much her body and her damn heart keep arguing with her.
Nate McKenna could give a shit about the no fraternizing policy. He wants Jules and he'll have her. The rules could bend around them, or be damned. He's not a man to be taken lightly, and Jules Montgomery is about to find out just how he responds to being pushed aside after the best night of sex he's ever had. She can fight all she wants, but he'll have her in his bed in the end.
FIGHT WITH ME is the second novel in the With Me In Seattle Series.

WHO is ready for more Kristen Proby?  Me Too!!!  And let me tell you this one is a GOOD one... y’all are going to LOVE Jules and Nate!!!!  Check out this little snippet....

“Julianne,” his voice is rough with emotion and he leans his forehead
on mine, wraps his arms around me and holds me close. “Say it again.”
“Which part?” I ask with a laugh.
“The good part,” he whispers.
“I need you.”
“The other good part.”
I run my fingers down his smooth cheek and brush my lips over his,
breathing him in.
“I love you.”