With Everything I Am (The Three Series #2) Review 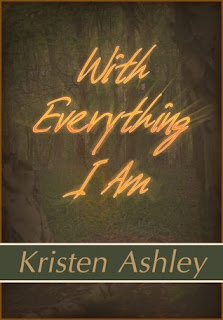 With Everything I Am by Kristen Ashley

Book description…
One night, Callum is driven into the woods by instinct, an instinct to protect. In the form of wolf, he meets a young human child who he is instantly drawn to in a fierce way he doesn’t quite understand.
Sonia Arlington has lived a lonely life. She has certain abilities that make her strange and she has a rare disease that, if untreated, could kill her. Her father makes her vow that she will never let others discover her abilities. This forces Sonia to stay distant, always guarding against exposure.
Intelligence leaks that Sonia is Callum’s human mate. He is now King of the Werewolves and has war on his hands. He’s forced to claim his mate and integrate Sonia into a world that is strange and frightening.
As Sonia attempts to adjust, Callum attempts to cope with the knowledge that his mate is mortal. He will have her beauty and gentleness only the length of a mortal life making their union unbearably bitter even as Sonia makes it unbelievably sweet.

Ah, it’s so good to find my way back home to the amazing stories that my dear author Kristen Ashley writes… it’s been a while since I’ve gushed about my hard core feelings of love and gratitude for this woman and the stories she creates, but here I am with one that had me sobbing in bed at 2am and my husband cuddling up to me asking if everything was okay.  Unfortunately when I told him what had just happened he looked at me like I’d grown a second head, kissed my cheek, and told me that it was just a book… JUST A BOOK?  He had to have been kidding because we all know that Kristen does not just write books… she writes masterpieces that I just can’t seem to get enough of!

I have a major girl crush on Sonia… seriously!  The woman is beyond awesome and I feel that way because she’s still this picture of beauty with a heart of gold, even after she has been through hell in her life.  She puts those she loves before herself and she genuinely cares for a person’s wellbeing, even if she barely knows them, or sometimes even if she knows them at all.  I adored her and have to admit that while most of the time I’m on the heroes side in a book because the heroine always gives him a hard time… in this one, I was not.  It was all about Sonia and what would make her happy.  But then again Callum made that pretty easy!

Callum is a bit difficult for me to talk about because in all honestly I had a love hate relationship with him… I loved to love him and I hated to hate him.  And there were times when I actually kinda sorta hated him.  Granted he didn’t really do anything wrong, well okay he did but not intentionally, but I still couldn’t help the fact that my heart still hurt that even his subconscious was thinking things that made me want to pack Sonia up and bring her home with me.  But when I loved him… OH. MY. GOD. I loved him.  The whole marking thing, yeah… that totally made me smile and wish that my hubby was a werewolf just so he could ‘mark’ me in the sweet way that Callum marked Sonia.

These two really do have something special, but it takes a while for them to actually get there and realize what they have in each other.  They’re not entirely open with each other in the beginning and it actually causes problems for them on top of the problems they are already facing to save the human race from becoming slaves.  But it’s not only the two of them who are not exactly open with each other and had these other people been more open with Callum and Sonia or even at least one of them… maybe I wouldn’t have been sobbing in bed at 2am… but I was and even though I hate to admit it, maybe that’s what made that whole scene more powerful… because I didn’t know, because I had to experience it right along with them.

Speaking of – if you haven’t read Until the Sun Falls from the Sky (Lucian and Leah’s story) get on it now because Lucian and Leah make quite a sweet little cameo on the book and I was overjoyed to see them and see how sweet and beautiful their relationship still is!

As usual… With Everything I Am is more than worth checking out… as is anything Kristen Ashley!  She’s a rock star and I can’t wait to find out what will happen in the next book.. I’m definitely looking forward to the conclusion of this series!