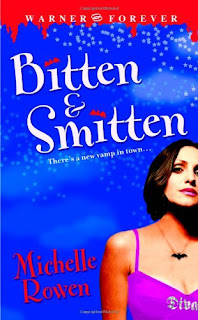 Bitten and Smitten by Michelle Rowen was a light humorous paranormal read.

After a blind date bites Sarah Dearly on the neck and is killed by vampire hunters, she discovers she's not only a vampire but also has been left to learn the ropes of the night by herself. Thank goodness for wise "master" vampire Thierry de Bennicoeur, who saves her life, shows her to the nearest vampire hangout and wins her heart in the process. Next comes a mix of misplaced trust, stakings and bad double dates, all with the goal of outwitting the vampire hunters and getting Thierry to see that Sarah's the one for him.


I must admit that I really enjoyed Sarah...she is an extremely sarcastic, quick witted woman who has just had one hell of a bad week!  It all starts off with a very bad blind date where she's bitten on the neck and wakes up to someone burying her alive.


My blind date had just attempted to bury me in a cemetery.  Filled with dead people.  And bugs.

Gross!  She ends up fleeing her date even though he seems to believe they are made for each other and he knew from the moment he saw her that he just had to have her....ummm...can we say pyscho????  Ok so she gets away right?  Well not really because while running from him she finds herself running straight to vampire hunters and they kill her date.  Once they turn towards her she takes off again and finds herself on a bridge with a man (Thierry) attempting to kill himself


"Help yourself.  Can you not see I'm planning to kill myself here?" the man said, looking down at the dark water so far below us.  "Help me first and then kill yourself"

It all kind of went down hill from there.... Thierry saves her, tries to scrape her off again but finds out her "sire" had been killed so he takes her home and gives her some of his blood.

The next day, Sarah goes into work, has a slight incident with her boss where a small cut and some finger sucking was involved....dirty minds it's not what you think.... and she ends up getting fired.  So after realizing she was indeed NOT dreaming she takes off to the place Thierry told her about if she needed help which happens to be a tanning salon.

She makes a bargin with Thierry that she will leave her old life behind (which she doesn't plan on doing) and he will show her the ropes but it seems that something always happens and Sarah and Thierry end up in some sort of agrument every time she leaves Midnight Eclipse.  So off she goes but instead of going home she goes across the street for a drink which happens to be a vampire hunter hang out and meets Quinn.  They're having a good time drinking together then she lets it slip that she is a vampire and Quinn plans to kill her.  Fortunately she gets away......Unfortunately he finds her again the next day.  She takes off running and just as he catches up with her to finish what he planned he is tackled by vampires.  Quinn tries telling him it's none of their business


The man glared down at him.  "It's definitely my concern when someone messes with the master's new girlfriend."

Of course, Sarah is a tad confused by this.....but word spread around the vampire community pretty quick because apparently it's a huge deal for Thierry to help anyone out let alone give them his blood.  So anyway, thinking Quinn was dead she was quite surprised when she found him turned into a vampire after leaving Midnight Eclipse the same night.  She takes him to Thierry to help him out.  Thierry doesn't want to help him, Quinn doesn't want the help but unfortunately for both of them they both seem to have a soft spot and do what Sarah wants.

This new crazy life goes on for Sarah....... she has a wedding to attend where the preacher tries to kill her, Thierry sends George to look after her, her fangs come in, she finds out drinking alcohol as a chaser to blood will make her drunk, Thierry gives her a shard (a reflective piece where vampires can see themselves whereas they can't in mirrors) and then he kisses her, she finds out Thierry has a wife, Quinn finds her and tells her he can't stop thinking about her and thinks they could have something special together, she goes on a horrible double date with her best friend Amy, she takes Amy to Midnight Eclipse where she falls in love with the little person vampire Barry who wears a tux and bow tie and ends up a vampire and engaged, gets tricked into giving Thierry's location away with the hopes of a cure for vampirism, and finally has to kill a vampire hunter!

Wooo....she was one busy girl!.... After the whole fiasco at Midnight Eclipse, Sarah uses her spidey vamp sense to find Thierry who has taken off to finish what he originally planned to do the night he and Sarah met.  She realizes she is in love with him and wants to do what she can to save him.


"Because, stupid, I'm a little bit crazy about you."  He blinked those dark, dark eyes at me.  "Perhaps you're just a little bit crazy."  "That's a definite possibility.  But here's the thing, Thierry.  I think I love you.  I don't care if you don't feel the same way about me.  It's the truth.  I love you.  And if that means nothing to you, if you're just going to jump off this bridge because you feel that there's nothing in this life to keep you here, then go for it.  Just know I'm going to be right behind you."

Well that got his attention.......they ended up having to take another plunge off the bridge but found themselves having a nice vacation in Mexico three weeks later.

While the story was a light read, quite humorous and I do recommend reading it... I just can't say that it did anything for me.  Maybe it's because I'm too into my romance phase at the moment and this was just too Chick-lit for me right now but I just couldn't really get into it.  I had quite a few LOL moments but if I were to put it down at any point and not have picked it back up I wouldn't have minded. This is the first in the series and I will probably at some point read the other 4 books as breaks in between other books.
My thoughts are NOT a reflection on the writing because I have to say Ms. Rowen's writing was FUN - NY!!!!! It just didn't have that love story I'm looking for right now.