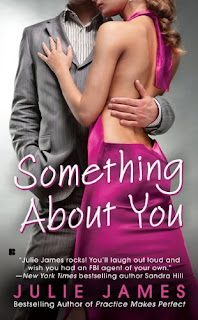 Something About You by Julie James was a great light read that held my attention and kept me laughing out loud!

While staying in a hotel due to rennovations at home Assistant U.S. Attorney Cameron Lynde witnessed some hot-and-heavy lovemaking ending with a death. And of all the FBI agents in Illinois, it had to be Special Agent Jack Pallas heading the investigation.  The pair is going to have to put their rocky past behind them and focus on the case at hand. That is, if they can cut back on the razor-sharp jibes- and smother the flame of their sizzling-hot sexual tension.

I really enjoyed our female lead, Cameron Lynde!  A career driven woman forced to face situations that would have most running for the hills.  She's smart and quick thinking, sassy and full of sarcasm, and let's just say can come up with some great one liners ;).....My kinda Girl!!!!


Thirty thousand hotel rooms in the city of Chicago, and Cameron Lynde managed to find one next door to a couple having a sex marathon.

I could only imagine how bad that would suck....seriously!!  So after hearing the energetic couple start round two at 4 o'clock in the morning she decides she has had enough and calls the front desk to have something done about it.  Unfortunately, there has been a murder in the room next door and since Cameron happened to peek out her peep hole and saw the back of the murderer she is now in the throes of a full on FBI investigation!  Even more unfortunately is Agent Jack Pallas happens to be the Special Agent in charge of it.

So a little history of Jack and Cameron.... Three years prior Jack and Cameron had been working together to press charges against a big player in the drug trafficking in Chicago where Jack had been working undercover and was tortured for two days and made it out with serious injuries.  So after her boss, Silas, tells her he has decided against filing any charges in the case and informs Cameron she will be letting Jack know of this decision.  As well as tell him nothing of how the decision was made.  He threw her right under the bus....big time.  So she tells him and, understandably, he is PISSED!


"I think the assistant U.S. attorney has her head up her ass, that's what I think.  They should've assigned the case to somebody with some fucking balls."

Sooooo....Jack's little comment that almost got him fired, got him sent to Nebraska for three years in stead.  But what Jack doesn't know is that the transfer was the best Cameron could do for him as far as saving his job.  Because he doesn't know that he's still a tiny bit....okay a lot still upset with her when he sees her for the first time.

So moving back to the story.  Jack walks into Cameron's hotel room with his partner Sam Wilkins and they start questioning her...well Wilkins questions her because she suddenly feels like only cooperating with him and not with Jack.  Jack steps in a few times and Cameron just can't help but throw some sass at him and his attitude while questioning her


"I heard butt cheeks being slapped and walls that were banged so hard my teeth nearly rattled.  Frankly, I've found this whole evening to be a little odd, Agent Pallas."

She really did crack me up!

Jack is a typical moody alpha male that is still pissed at what happened between him and Cameron three years prior but is trying real hard to put it behind him so he doesn't have to leave Chicago again.  He did regret what had happened three years ago especially since he actually didn't mind working with Cameron so much at the time.  But he also didn't think he'd have to face Cameron a week after being back home so he had a little bit of a difficult time not playing "Bad Cop"

So as a precautionary measure the FBI  requests that the C.P.D. keep an eye out on Cameron.  Well...that doesn't turn out too hot and the bad guy ends up getting into her house and holds her at gun point.  Jack comes to the rescue....you even get that in his P.O.V. ....big sigh..... The FBI, namely Jack, decide they are no longer taking chances with Cameron's safety and Jack moves in with her. The chemistry between the two is hot....sizzling hot...and after an almost kiss a few days before and a major hot little make out session they both start to question their feelings for each other.


"Shockingly, some people actually find me charming."  "I once found you charming, too." Jack said quietly

So Cameron decides since they've danced around the past enough it's time to tell Jack about what happened three years ago.  Every thing changes from there....boy do they ever ;)  Jack's only response is to lay a hot one on her!


Things had changed for Jack, ever since he'd found out the truth about what had happened three years ago.  Because of that he asked a lot of questions, wanting to learn more about Cameron.

They learn more about each other while in Michigan at Amy's wedding.  She tells him about her father and how he was murdered and how that influenced her decision to apply for the position at the U.S. Attorney's office.  He also finds out how she ended up with such a nice large house on the income she makes.  They even talk about their thoughts they had of the other three years ago and even in between


"You're so beautiful, Cameron," he said, running his finger along the side of her face.  "Despite everything that happened, over the last three years there were so many times I would lay in bed at night, thinking about you."

Awwww....who wouldn't melt at those words?  Once they get back to Chicago, Jack has her pick her code for her new security system

So cute and something I would so do too LOL.  Now, Jack and Cam are starting to really think about their feelings for one another.  He's realizing that with just a smile she's got him wrapped around her finger, and she is asking herself if this is what it feels like to fall in love.  Jack asks Cam about her internet connection because it seems slow and she responds by telling him if restarting doesn't work she just calls Collin


Jack folded his arms across his chest.  "I think we need to talk about this Collin dependency.  Because there's a new sheriff in town." "Hmm.  That's a little alpha for my tastes," Cameron said

A bunch of stuff happens next....the murderer is in Cameron's house, he gets into a bit of a scuffle with Jack and ends up in a position where he doesn't have much choice but to follow Jack's orders


"Since you've been listening, you know what she means to me.  I would kill anyone who harmed her.  Give me the name and I'll make an exception."

Of course he tells and because of his response and Cameron's awesome prosecuting record, along with her being one tough cookie she gets a big promotion.


It just occurred to me that as a U.S. attorney, you're now in a position of authority over me."  Cameron raised an eyebrow.  "You're right, Agent Pallas.  There is a new sheriff in town."

Love it!  So in the end Jack and Cameron get their happily ever after plus some ....Yippee!!!!!....  Cameron decides to kick her new position off with a bang and filed charges in the case Jack had been working three years ago, she asks him to officially move in with her, and her and Jack profess their love for each other!

Something About You was a great story!  I enjoyed the characters, their interaction with each other, and most especially the quick witted sarcasm of all of them!  I would definitely recommend this read especially if you enjoy a hot alpha male that carries a gun because of a position in power and a sassy, smart woman who comes off fearless!  I will definitely put Something About You on my reread list and will check out more of Ms. James books!